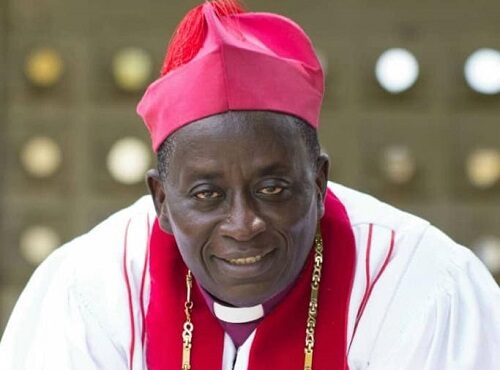 The Founder and leader of the House of Prayer Ministries International, Bishop Dr Samuel Yaw Adu, has said that the problems of the nation are not anything special that cannot be solved but the leaders have rather refused to seek God and know Him better.

He said book knowledge without God “is like a drop of water in the ocean because everything emanated from Him.”

Quoting from 1 Samuel 23, he said David always inquired of the Lord before taken any decision and that made him successful in all his ways.

According to him, “any leader who knows his God does not involve himself in corrupt practices because the Lord is with him and always seek the welfare of its people.”

“It is now God’s prerogative to choose teachers for our leaders because Ghana, the pacesetters and teachers of other nations are now being instructed in their duties by the IMF”, he stated.

He urged the leaders and the clergy to lay down all their big titles down, seek God and His directions for the nation.

Pastor Yaw Adu made these comments at his birthday celebration at Koforidua recently.

He said Paul with all his knowledge prayed in Philippians 3:10 that he may know God to serve His people better and, therefore, it was incumbent on the leaders to also do same to enable them steer the affairs of the nation better.

The man of God advised the youth to be disciplined and respectful to the elders of this nation.

He urged them to stop all the social vices and concentrate on their future development and appealed to all workers to put the nation first for the sake of the children and the future of Ghana.

“Ghanaian workers go to work as if the clock of the nation has been re-wound two hours back” he said, and added that the fixing of the nation was a collective effort of all.