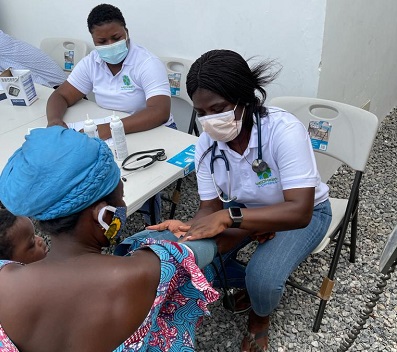 Dr Edna Mark Addy, Founder and Chief Executive Officer of Med Health Centres at Ablekuma Joma,in the Greater Accra Region has cautioned individuals who usually rely on “self medication” to avoid the act, because it has an adverse effect on their health.

According to her, “self-medication is creating more harm than good, in a sense that, it rather worsens one’s ill-health instead of treating or curing the disease.”

She stated that the perceived illness or disease may actually not be the exact diagnosis but rather, a whole different health problem which has  absolutely  nothing to do with the self medication treatment process.

She gave the advice in an exclusive interview with “The Spectator” at the opening of the two health facilities at Ablekuma CP and Joma last Saturday.

She stressed that when one began to feel unwell, one should not hesitate to consult a physician for treatment in order to prevent the situation from becoming worse.

The Medical Doctor said that self-medication,  would become problematic for treatment when the person finally reached the physician for critical or intensive care.

That, she emphasised, made it difficult for medications that have been administered on the patient by the physician to work effectively and cautioned persons who usually took paracetamol to cure their severe headaches and other perceived illnesses, to put a stop to that dangerous act.

Explaining further, she said“when paracetamol is taken, it breaks down in the liver and persons living with liver diseases or heavy alcohol consumers are at the risk of not staying healthier.”

According to her, one may not know the chemical compositions of the drugs they had taken, which would later turn to worry one’s health, adding that, “the risk of self-medication outweighs its intended benefits.”

Dr Mark Addy assured clients who would visit the new clinics at Ablekuma CP and Joma of best of treatments  from seasoned health practitioners who would be attending to their health needs.

“We should be cautious about our diet and always eat healthy foods to keep the body functioning well,” she said.