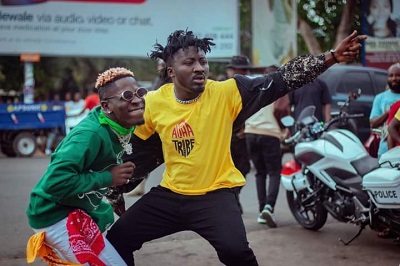 Gone were the days when Kumasi was seen as the citadel of Ghana’s creative arts industry producing prominent musicians, movie makers, among other amazing talents in the entertainment circles.

For some time, this long held title, has vanished, due to lack of support and spotlight to enable artiste cross over to mainstream stardom.

This has led also to a surge in musicians and actors who cut their professional teeth in the trade in Kumasi move to Accra to grow their craft and take it to the next level.

Interestingly, the script, seems to have changed for budding musicians in Kumasi following the ‘Kumerica’ trend. One of the sectors in Kumasi which has benefited enormously from the ‘Kumerica’ sensation is the music industry, as the trend has put a lot of spotlight on music talents.

Kumerica is an internet slang for the Garden City of Ghana, Kumasi in the AshantiRegion. The word Kumerica was coined from a blend of Kumasi and America (Ku + merica) by the young people of Kumasi who live ostentatious lifestyle full of luxury and display of jewels and flashy cars like the people of America.

Originally, their main purpose was to showcase their riches and luxurious lifestyle, to tell the world that though they live in Kumasi their lifestyles are like Americans; and this includes how they speak American English.

In the light of this, the Kumerica vibe has gripped the whole country in various dimensions, to the extent that, music talents from the region have taken advantage of the trend to release a lot of songs to catch the attention of the world.

This culminated in the dancehall heavyweight, Shatta Wale who stormed Kumasi on Thursday, November 5, 2020, for an initiative termed as “Kumerica Invasion project.”

From the scenes, and interviews granted so far by artistes like, Amerado, Ypee, Phrimpong, Kweku Flick, King Paluta, Kofi Jamar, and Phaize who are involved in the project, Shatta Wale’s presence in the region was a dream come true for young upcoming musicians.

Many see it as a masterstroke to instill confidence and energise the base of music in the region, and subsequently open the door for many to rise to the top.

Though other accomplished artistes over the years had extended support to budding artistes through collaborations and others means as this move by Shatta Wale has taken a different turn from the normal route.

Shatta Wale decided to go to Kumasi, shoot the various scenes of the music video in the neighbourhoods of the artistes featured on the song.

A move which has validated the artistes in their communities, increased the buzz around them and shot up their popularity.

One of them said, the initiative had made him and his other colleagues more popular in their community which was good for their brand. Clearly, from the numbers the activities have attracted coupled with  the media hype, these young artistes could take advantage of the situation to make a strong case for their careers.

This calls for unity, hard work and consistency to keep the Kumerica Movement strong and going.

Kudos to Shatta Wale and his team for extending this helping hand to budding musicians in Kumasi.