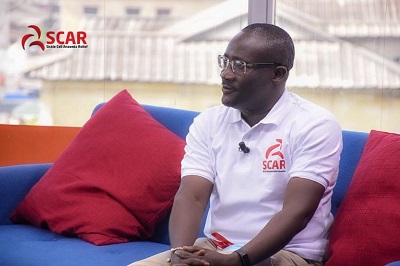 The initiative is aimed at touching lives and making society better for people living with sickle cell.

Speaking at the virtual launch on June 19, 2020, the Executive Director, Mr Maxwell Dodd reiterated the need to tell the real and personal life stories as well as shed light on the challenges faced by carriers.

“We should not only shed light but support financially and that is what the Sickle Cell Anaemia Relief International intends to do,” he revealed.

He added that, “We hope that through our projects, we can touch more lives and make society better for all sickle cell carriers whilst putting eternal smiles on their faces.”

The theme for this year’s World Sickle Cell Day celebration was, “Shine the light on sickle cell”, which primarily is to create more societal awareness on this public health disease and the challenges the carriers, family and care givers face.

World Sickle Cell Day was established by the United Nation’s General Assembly in 2008 in order to increase the awareness about the sickle cell disease (SCD) and its cure among the general public. It was first celebrated on June 19, 2009.

According to the World Health Organisation, SCD, which affects over millions of people worldwide including adults and children, is one of the main causes of premature death among children under the age of five in various African countries.