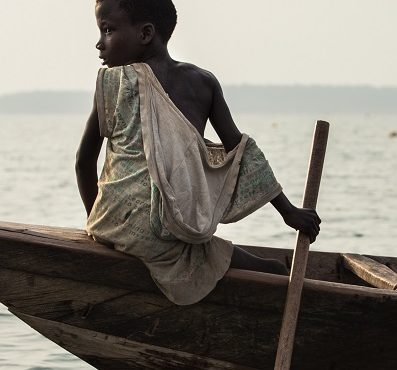 During one of his times at the drinking bar, he had an encounter with a fisherman from a very far fishing village. The fisherman had come to Alakple for a funeral. He had joined the rest of the men at a table to drink.

Having taken a few more than enough, each of the men at the table began to narrate the happenings in their respective lives. From the conversation among the drunk men, it was revealed that the fisherman, Tulasi, lived on the island of Vakpome.

He was the chief fisherman of the village with exploited children. Each year, he moved from one village to another recruiting children to work with him. He would then give the parents of such children a considerable amount of money with the promise of taking care of their children.

He continued to boast that he had made a lot of money. After recounting some of his exploits, Tulasi gulped down a glass of alcohol and beat his chest repeatedly. His fellow men present, including Papa Soglo, were spell bound.

Tulasi continued, “Therefore, anyone who is interested in having his child learn fishing is free to see me for talks. As I said, the children under me are well taken care of. After some years, they are allowed to return to their families and work with the skills acquired.

Parents of such children are not left out; At least they are entitled to a token as a way of saying “thank you”for releasing their children.” upon hearing all that had been said, Papa Soglo nodded as he gazed at Tulasi. When the men dispersed, Papa Soglo trailed Tulasi for more details.

In an enthusiastic mood, he stated, “I have a son and will like you to take him with you.” “How old is he?” Tulasi asked. “Ten years.”, Papa Soglo answered sharply. “Good. Today is Saturday. I’ll leave in three days time and so prepare him for that.”, said Tulasi. “Where can I locate you”?

Papa Soglo asked happily. Tulasi answered, “Just meet me at the drinking bar. ” Papa Soglo’s love for money superseded the life of his son that he failed to recognize that he was giving his boy to a stranger whom he had known for just a day.

The second night after the meeting between Papa Soglo and Tulasi had arrived. The night was calm and chilly with the calm breeze patrolling the environment. The following day would be the departure moment.

Papa Soglo had not disclosed his clandestine motive to his wife, Yawa. Papa Soglo called Sitsofe to get him some water to drink. As soon as he brought the water, Papa Soglo asked him to sit beside him.

“Sitsofe, you’re my son and I want the best for you. So tomorrow, I’m sending you to one of your uncles to take care of you. He’s a good man. He’s going to teach you how to fish. As you can see, I’m aging and can’t take care of you as I wish.

I want you to comport yourself while you live with him and I don’t want to hear any complaint about you.”Papa Soglo whispered to his son softly.