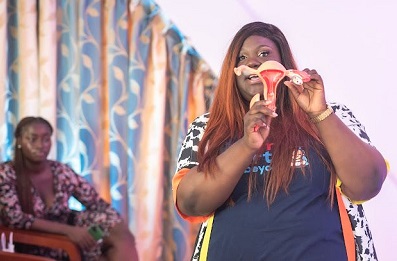 Dr. Karen Amaniampong, an obstetrician and gynaecologist with Jubail Specialist Hospital at Sakumo­no-Accra, has highlighted the need for women to pay criti­cal attention to their health during gestation and beyond.

She exclusively told The Spectator that pregnant mothers must eschew harmful lifestyles, including smoking and alcohol consumption, which are very dangerous to a woman’s health because even a little alcohol can delay conception.

The fertility specialist added that there was no safe limit for smoking, and if one is trying to have a baby, it is important to quit smoking at least three months before you start trying for a baby.

According to the special­ist, smokers are more likely to have a miscarriage, a low birth weight baby, or a prema­ture baby with birth defects, and being with a partner or in a household where someone smokes could be detrimental to a pregnancy.

The specialist indicated that, it was imperative to have conversations about women’s health and well­ness to enhance productivity and their fertility levels as a means of improving their general well-being.

During the “Bump, Birth, and Beyond” health seminar held recently at the Jubail Specialist Hospital at Saku­monno in Accra, participants were taken through important tips to note at every stage of their lives in order to avoid health complications.

Dr. Amaniampong, in her presentation, underscored some critical conditions as­sociated with childbirth and some possible solutions to the problem; these include pre­conception tips, minor disor­ders in pregnancy, and danger signs during pregnancy.

According to the specialist, every pregnant mother must not compromise with some preconception guidelines, including taking prenatal vitamins like folic acid supple­ments, which are important for preventing brain and spinal abnormalities in babies.

The specialist recom­mended that it was good for pregnant mothers to take folate at least one month be­fore pregnancy and also give themselves a boost by taking a multivitamin to bridge any unforeseen gaps.

On her part, starting pre­natal care now would help the pregnant mother to correct and avoid any nutritional deficiencies during early preg­nancy.

She revealed that weight extremes are determinants in childbirth, where both over­weight and underweight pose problems.

“Maternal overweight increases the risk for diabe­tes as well as hypertension in pregnancy, while maternal un­derweight is associated with preterm birth and intrauter­ine growth restriction.”

Stressing some minor disorders in pregnancy, Dr. Amaniampong said during pregnancy, a woman’s body changes in many ways, and these changes could some­times be uncomfortable, but most of the time they are normal and could occur at any time during the pregnancy.

Touching on some of the common minor disorders of pregnancy and ways to overcome them, the specialist mentioned nausea, vomiting, and hyperemesis gravidarum as some of the conditions.

“Many women have nausea and vomiting in the first trimester, which is the first three months of pregnancy; this is often called morning sickness, but nausea can be there for some time, and that comes with excessive saliva­tion,” the specialist indicat­ed.

To manage nausea, the medical expert recommended that, before bed or at night, a pregnant mother should eat food that contains protein, such as beans and nuts.

She added that mild nausea could be managed by eating a few bananas, dry bread, or other dry grain foods upon waking up in the morning, eating many small meals instead of two or three larger ones, and taking small sips of liquid often.

The doctor prescribed that nausea could be managed by drinking a cup of mint, cinnamon, or ginger tea two or three times a day, before meals.

“Put a teaspoon of mint leaves or a stick of cinnamon in a cup of boiling water and let the tea sit for a few minutes before drinking it; to make ginger tea, boil crushed or sliced ginger root in water for at least 15 minutes,” she prescribed.

Another serious disorder known as hyperemesis grav­idarum, for which the woman needs to be admitted to the hospital for medical atten­tion, is a disorder that comes with excessive vomiting, weight loss, and dehydration.

The obstetrician and gynaecologist said headaches are common in pregnancy, but are usually harmless, and this condition may stop if the woman rests and relaxes more, drinks more juice or water, or gently massages her temples.

To relieve a headache, she advised a pregnant woman to take two paracetamol tablets with a glass of water every now and then.

Dr. Amaniampong said headaches that occur late in pregnancy may be a warning sign of pre-eclampsia, es­pecially if there is also high blood pressure, or swelling of the face or hands.

She explained that pre-ec­lampsia is a disease of preg­nancy that is marked by high blood pressure and protein in the urine after the 20th week of pregnancy.

In managing the aforemen­tioned conditions, the spe­cialist recommended drinking enough water while getting enough rest as a conducive practice for the period.

The medical expert ob­served that skin changes like dark spots or patches on the skin called melasma, acne, pimples, and stretch marks are sometimes due to chang­es in hormone levels that happen during pregnancy.

According to her, these dark spots and melasma skin changes usually fade on their own after you give birth, and she admonished that if you are unsure about any of the things mentioned above, seek medical attention.

Dr. Amaniampong observed that most expectant mothers experience an uneventful pregnancy, adding that, there are certain dangers associat­ed with pregnancy that could result in health complications for both the expectant moth­er and the baby.

She outlined that, vaginal bleeding, fever, constant nau­sea, and vomiting that may be encountered during any stage of the pregnancy must be reported to a specialist immediately.

Other signs she noted include leaking fluid from the vagina, little or no foetal movement, contractions, vag­inal discharge, and itching, all of which are very alarming and should be treated imme­diately by seeking medical attention.

According to the special­ist, pregnant women who experience persistent severe headaches and blurred vision should seek medical attention immediately because these symptoms could be a sign of pre-eclampsia, which can lead to seizures and even stroke if left untreated.