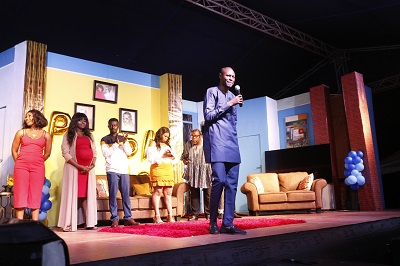 Not even the rains could deter hundreds of patrons who turned up at the Labadi Beach Hotel in Accra to watch open-air play christened ‘Something must kill a man.’

The play produced by Latif Abubakar’s Globe Theatre was shown at 7 p.m. each night from September 2-4.

‘Something must kill a man’ was centred on team commitment, loyalty, bondage and humour needed to help achieve organisational goals.

Patrons had a good time enjoying a story of one Mr. Arthur who retired and handed over his company to his son, and surprisingly, set him (son) up with a charming beautiful lady.

Speaking to The Spectator, Latif Abubakar described the event as successful and expressed his appreciation to the patrons, the media as well as other stakeholders for their support towards the event.

“It rained each day of the event, yet we had many people at the venue to the extent that we had to restrict others from entry due to COVID-19 protocols. We have to say thank you to everyone,” he said.

According to Abubakar, it marked a rekindling of interest in stage play after the ravages of deadly COVID-19.

He told this paper that the feedback from patrons on the lessons from the play had been massive, and was impressed about its impact on lives.

Mr. Abubakar further noted that this was a huge motivation ahead of their upcoming plays in December this year.