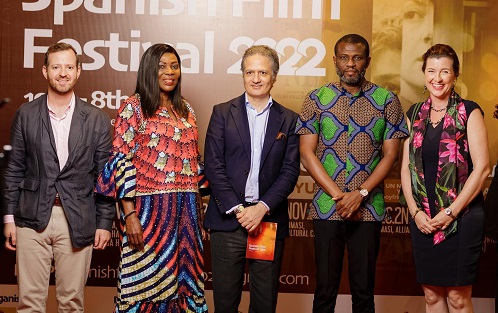 AMA boss and a team from the Spanish Embassy

The Spanish Embassy in Ghana on Saturday, November 26, 2022, launched a Spanish Film Festival to serve as a platform for Ghanaians to patronise movies from Spain.

The event held at the head­quarters of the Accra Metropolitan Assembly, was attended by Ghanaian actors, musicians, media personali­ties, Spaniards and Ghanaians.

Speaking to The Spectator the Spain Ambassador to Ghana, His Excellency Javier Gutiérrez said his outfit is happy achieving this feat.

According to him, over the years the embassy has done a lot of cultur­al activities in Ghana, and knowing Ghanaians love movies, they will show seven movies in three weeks.

He added that the feedback has been so good with a lot of people turning up, adding that it will con­tinue to December 8, 2022.

Javier Gutiérrez noted that the initiative which also serves as an avenue for networking would be rep­licated in Kumasi and Tamale aside Accra.

The Deputy Minister of Tourism, Arts and Culture, Mark Okraku Man­tey, said the relationship between Ghana and Spain is growing stronger through the arts and culture.

He said there is more opportunity for both countries to do more busi­ness within the space.

This he said would serve as a platform for both countries to devel­op together.