Speaking the truth and damning the consequences 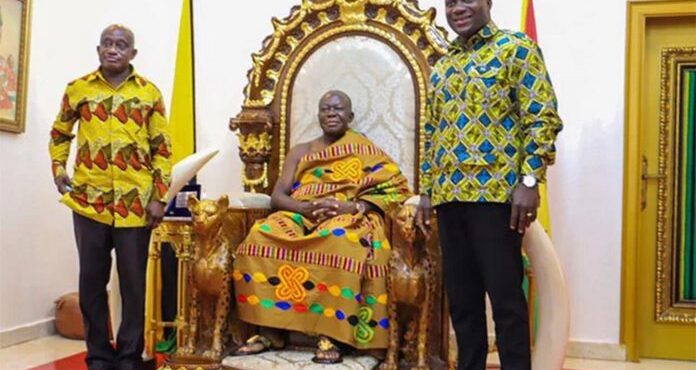 Sometime last week, the Asantehene, Otumfuo Osei Tutu II, did something amazing but justifiable and that demonstrated the type of King he has been and further, strengthened the respect most Ghanaians have for him. No wonder, he continues to be used as a channel by successive governments to resolve most of the hydra-headed and dreadful chieftaincy disputes and other problems in the country.

The revered King shocked his audience in his speech delivered at the first edition of the Regional Consultative Dialogue on Small-Scale Mining in Kumasi, the Ashanti Regional Capital, when he exposed the Regional Minister, Mr. Simon Osei-Mensah and the Lands Minister, Mr. Samuel Abu Jinapor, who have apparently asked him in confidence, to stick to the speech that had been prepared for him in order not to generate controversy in the country.  But knowing this great King for what he is, he rather made the secret intention of these two personalities to him known to the gathering, explaining that it was necessary to stress these issues which he believed were obstacles to winning the galamsey war.

Hear him, “Yesterday (Tuesday), the regional minister and my son (Samuel) Jinapor came to me and said, ‘Nana, please say what is in the speech and I said alright I will.’  They felt I will say something else that is controversial”.

The Asantehene was reported to have said in plain language that, ‘on issue of galamsey, when we divide the audience in this room into 10, 30 per cent of them will know those involved in galamsey…if you are not truthful, we will keep deceiving ourselves and be organising conferences such as this’.  He told the gathering that, on his part he had already warned his chiefs and elders against their participation in such illegalities and that he would not hesitate to strongly sanction such infraction.  According to him until the government and all stakeholders confronted the truth about the galamsey threat, the fight would be unsuccessful.

This is a profound speech from a great leader who does not mince words and must be applauded by all right thinking Ghanaians who are interested in the fight against this illegal business which continues to threaten the survival of our dear nation, Ghana.  Just as his strong and straight to the point remarks received thunderous applause from audience in the auditorium, the entire nation must take a serious view of the wise counselling from the Asantehene, if we really mean serious to fight this canker which for so many years had destroyed our water bodies, farm lands, food crops, the forests and drinking water.  At the moment, our sources of water are polluted to the extent that the colour of drinking water is brownish, thereby posing serious threat and danger to the lives of Ghanaians.

INVOLVEMENT OF GOVERNMENT OFFICIALS IN GALAMSEY

The most worrying aspect of the situation is the complicity of chiefs, elders, opinion leaders and even powerful forces in government who are deeply connected to this illegal, dirty and dangerous business. They have sold their conscience to the so-called Chinese businessmen for peanut and they keep plundering and polluting our environment with abandoned glee.  Just visit some of these galamsey sites and you will be shocked about the extent of damage caused to the environment by these so-called small-scale illegal miners.  Even the activities of these illegal miners have been extended to places of abode and people’s room just for the sake of money.  Children who are supposed to be in school, are being used as child labourers in some of these mining sites with their pictures trending on social media.  The continued usage of these sophisticated machines, excavators and other degradable equipment to destroy our God-given environment are difficult to imagine.

IMPORTATION OF WATER IMMINENT DUE TO POLLUTION

If this dangerous and dirty illegal business is not brought to a halt as quickly as possible, it would not be long when this country starts importing water for the citizens because, already, the extent of pollution of our sources of drinking water is quite unimaginable.  You cannot just withstand the offensive scent of water that flows into our homes from the laid- out pipelines.  The impunity of it is that these Chinese nationals who have dominated the business and are on the fore-front continue to use our military and other security personnel to threaten and attack Ghanaians who oppose their wicked activities and we look on unconcerned.  I don’t think this situation can be tolerated or allowed to persist in their home country China, where security of the state is on high alert.  I toured China on a number of occasions and I know what I am saying.  It is just not impossible for a foreigner to transact such an illegal business in that country, period!

HIDING THE TRUTH WILL AFFECT FIGHT AGAINST GALAMSEY

As righty pointed out by the Asantehene Otumfuo Osei Tutu II, if government and other stakeholders decide to hide the truth and sit back for the galamsey threat to continue, this fight will be unsuccessful.  We will expect the President as the Chief Executive of the state to lead this crusade now than ever, without fear or favour, partisan and other considerations to fight this dangerous canker in our midst.

It is a fact that previous administrations tried to confront the menace in various ways but to no avail just because the very people who were then at the forefront to deal with the problem, were themselves deeply engrossed in the business.  Allegations were ripe about some politicians using proceeds from this illegal business to fund their political campaigns.  Those eras were gone and we need to tackle the problem head on in a more purposeful and aggressive manner because of the serious dimension it has taken.

SUSPENSION OF LICENCES TO FRESH MINERS

If it can be possible, the government should suspend the issuance of licences to small-scale miners, deal with the situation on the ground first to an appreciable level before thinking of starting of issuing new licences to prospective small-scale miners with genuine papers.  This will be a step towards sanitising the business to conform to the rules and regulations of the business.  The use of excavators and other heavy earth moving equipment in small scale mining, should be banned outright because that is the root cause of the extensive destruction of the environment and our water bodies.

The Regional and District Coordinating Councils under whose jurisdiction some of these small-scale mining businesses operate, must liaise with their various security councils to stem the tide of the activities of these illegal operators as a step towards dealing with the situation.  The Regional Ministers and District Chief Eexecutives of these coordinating councils who serve as chairmen of their security councils, must be held liable for any infractions in this illegal business.

It is important to acknowledge the forthrightness and commitment by Otumfuo Osei Tutu II towards the fight against this disturbing phenomenon. His determination and steadfastness about the worrying situation, are issues that should prick the conscience of every Ghanaian, guide other traditional leaders and people in positions of trust to do what is just and right in our quest to confront this illegal galamsey business entirely from our society.  How many of our traditional leaders will have the courage to resist attempts of being gagged by our politicians to conceal or supress the truth?

The truth must always prevail and reign supreme.