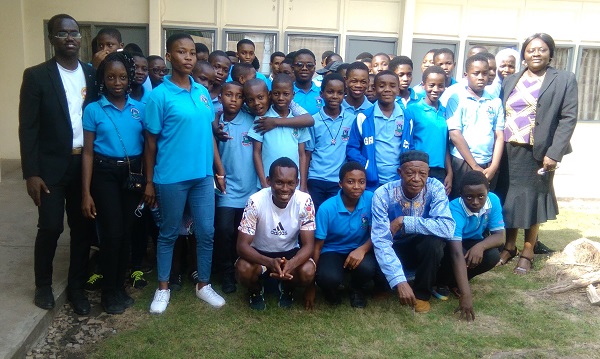 • Pupils and some staff members of the school with
Mrs Quaitoo Acting Editor & Mr Zangina-Tong,
News Editor of The Spectator Photo by Lizzy Okai

49 pupils from the Star of Suhum Cluster of Schools in the Eastern Region accompanied by five teachers, have paid a familiarisation tour to the New Times Corporation, the publishers of the Ghanaian Times and the Spectator, in Accra.

The pupils were thrown the challenge to take interest in writing letters and short stories to The Spectator for publication to enable them to improve upon their writing skills.

They were also told that the paper always kept its credibility by refraining from the publication of fake stories which could land it in trouble.

In response to a question on the use of pictures in publication, the pupils were educated on the fact that pictures gave credence tostories.