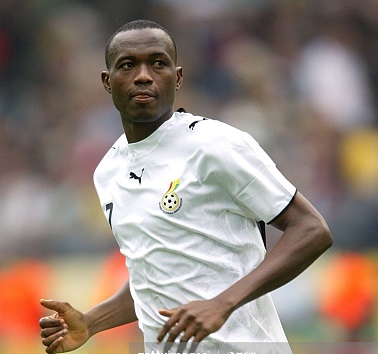 Former Ghana defender Shilla lliasu Alhassan says he never thought he would get the opportunity to play ahead of Bayern legend Sammy Kufuor and Issah Ahmed at the 2006 FIFA World Cup held in Germany.

Iliasu saw his breakthrough after he was handed a starting berth by then Ghana coach Ratomir Dujković ahead of Bayern star Sammy Kufuor in the second group game against the Czech Republic.

Kufuor had committed an error in Ghana’s opening game against Italy which saw the Black Stars lose their opening game 2-0 to the Italians in a very difficult encounter.

“I never believed I would get the opportunity to play at the World Cup. At my position, there was Sammy Kufuor who was the first choice followed by Issah Ahmed. Maybe the coach knew something I didn’t. Maybe at training, he saw some qualities, Shilla Iliasu told Happy FM.

“I played in the pre-tournament game against Korea which I excelled; so I had that confidence that I could play so I grabbed that opportunity to prove myself when I had the chance”.

Iliasu said he was praised by his teammates after making his debut against the Czech Republic.

“It was a big moment for me. The 2006 FIFA World Cup was our first at that stage and we were a bit nervous. And playing in the same position that has an experienced player like Kuffour and Issah Ahmed, I least expected that breakthrough.

“Like I said, it came to me as a surprise but I took it as my chance to show myself and skill to the world. Playing a Czech Republic side with very good players also didn’t make easy at all but we played one of our best games to win 2-0 to brighten our chances in the group.

“After the game, Sammy Kufuor and some players also commended me for my performance. It was a special feeling to hear the players motivate me”.

According to Illiasu, that marked a turning point in his career which saw him go on to play for several clubs in Ghana and outside.

“The World Cup is a bigger platform that every player hopes to feature in. We had our opportunity and we made the best out of it. It was unfortunate we didn’t go that far.”

The former Asante Kotoko defender was among the local-based players who were named in the Black Stars squad for the tournament.