Stay away from abusive relationships — DOVVSU 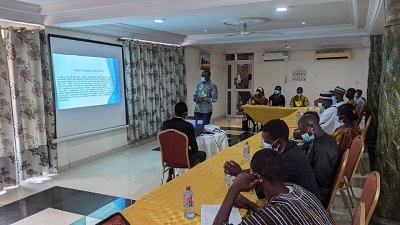 The Head of the Domestic Violence and Victim Support Unit of the Ghana Police service in the Upper West Regional Police Command, Assistant Superintendent of Police (ASP) Adongo Apiiya has encouraged women to flee abusive relationships and marriages before they were visited with perpetual harm.

He explained that although domestic abuse could be suffered by either partner in a relationship, the issue was very prevalent among women given their biological and physiological make-up.

“When the husband hits you for the first time, do not let it slide, talk over it, make sure to get proper compensation for that singular act because condoning violence with the hope that the person will change has led to the deaths of some women whereas others had developed mental issues”, he said.

ASP Apiiya said this at a meeting of community and institutional stakeholders on Gender and Sexual Based Violence at Wa on Monday.

His comment came at the backdrop of recent media reports of spousal killings in the country with mostly women at the receiving end.

“Domestic violence is punishable by law but if you allow yourself to be tortured by your spouse to the point of no repair, the law may of course take its course but you may never regain your old self and in instances where the victims die, there is no law under this earth that can bring the person back to life so personal safety should come first”, he admonished.

ASP Apiiya recounted instances where victims had reported abuse cases to DOVVSU and the perpetrators had been dealt with according to the law but the victims remained maimed for life.

“I am not in any way asking that you leave your relationships or marriages at the least provocation but then you need to talk over issues and ensure that no violent act is gone unpunished; if it is becoming unbearable, you can seek help from DOVVSU, the Department of Gender Social Welfare, Legal Aid and others; we can handle the issue promptly to avoid further harm”, he said.

He defined domestic violence as “a pattern of behaviour that frightened, intimidated, humiliated, manipulated or hurt another person in an intimate relationship including marriage, cohabitation, dating or relations within the family.”

He categorised the abuses into physical, sexual, emotional, psychological and economic violence and said either of the aforementioned had the tendency of causing either physical, emotional or mental harm to the sufferer.

In reference to the 1992 Constitution, ASP  Apily, expressed that the Domestic Violence Act, 2007, Act 732 made provisions for the police to apply for protection, court order, free medical care, among others for victims of domestic abuse.

He encouraged women not to shield their abusive spouses in order to safeguard their physical and mental wellbeing.