Stonebwoy emotionally recounts accident which caused him his leg 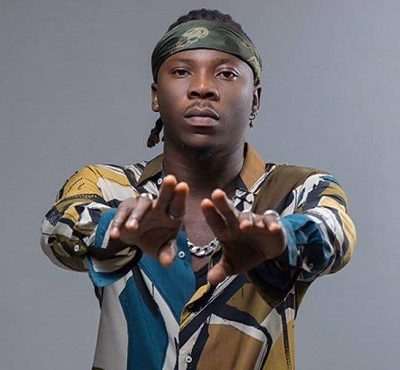 Ghanaian dancehall star, Stonebwoy, known in private life as Livingstone Etsey Satekla has emotionally recounted events leading to an accident which caused him his right leg.

According to the award winning musician they were returning to Ashaiman from Accra when the unfortunate incident happened on January 19, 2003.

Speaking on UTV’s United Showbiz programme on Saturday, the “Nominate” hit maker said, he had won some American visa lotteries, and on the back of it came to Accra with a section of his family to complete the process to enable him travel out of the country in two months.

Narrating the unfortunate incident, Stonebwoy, who was 13 year-old then, said upon their return to Ashaiman, and just after the old toll booth on the Accra-Tema Motorway, he alighted to urinate, and just after he had joined the car to set off again, an Accra bound Police vehicle summersaulted and crashed their car.

“That was when I lost my leg. My father, had his ribs broken, my elder sister, who is now in America, had some cracks in the head,” he revealed.

According to him, he was later sent to 37 Military Hospital, but it was full, and as a result, he ended up at the Korle-Bu Teaching hospital for treatment, where he spent six months.

The BHIM Nation boss, added that currently he had done total knee replacement surgery outside the country, where they replaced the bone with a metal to aid him walk.

Stonebwoy believes the aftermath of the accident was not properly dealt with and that his family would have had a better insurance cover if it happened elsewhere, because it involved a Police vehicle.

“All of these contributed to who I am today, my strength and inspiration is my life story,” he said

He revealed that his mother (of blessed memory), encouraged him a lot, anytime he was down in spirit, telling him, that,
“This is not how I gave birth to you, so continue to soar regardless.”

“She had always told me not to do a surgery, it was after she died that I did the surgery, he revealed.