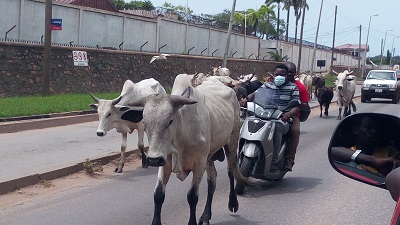 Residents  of Sekondi-Takoradi  have  continued to express their  anger and frustration  about stray  herds  of cattle  which   have  invaded  the   metropolis  and  causing nuisance  in the oil city.

They  pointed to the danger  the   cattle posed to vehicular traffic while grazing especially on the Sekondi road, towards the Effia Nkwanta Regional  Hospital.

They said  all efforts by the city authorities to eject the cattle herders from the city centre to Whindo  hit   a snag.

Over the years, the Sekondi-Takoradi Metropolitan Assembly(STMA)  have taken bold steps to drive away cattle  at the abattoir,   on the GHACEM road,  at New Takoradi.

A recalcitrant  cattle owner  had even established  a kraal  overlooking the Butua Lagoon, just about 50 metres, at the Takoradi Technical University  (TTU) bus  stop  and  had refused to quit the area.

At about 10.50 am  last  Tuesday, herds of cattle emerged from the kraal near the GOIL Depot, jammed the TACOTEL section  of the Sekondi road and caused a  gridlock as  vehicles were trapped  in traffic for about more that an  hour from Paa Grant roundabout to Sekondi.

Besides the nuisance, the cattle  posed danger to commuters especially motor riders.

A passenger complained : “ This cattle nuisance has become a  permanent  feature on this  road in a metropolis christened ‘oil city’.Indeed, they are a threat to  public safety.”

Another driver commented:   “Massa, it’s a  hell driving  on the Sekondi road  especially when the cattle block the road on their way to the Effia Nkwanta  to graze.It’s frustrating and dangerous.Our authorities must be resolute and ensure that the city is rid of  the cattle nuisance.”

The Spectator  recalled that  in September 2017, the late  Metropolitan ChiefExecutive, Mr. Anthony K.K. Sam,  had expressed serious concerns about stray animals and described them as  a  major  causeof environmental pollution in the twin-city.

He, therefore, resolved to take  drastic   measures including  prosecutions to  tackle this menace.

The  then  Presiding Member of STMA, Mr John Davies, had also expressed similar   concerns  particularly about   cattle roaming   on various  streets  and competing  with vehicles and also  posing danger to residents.

He also  called for strict enforcement of the bye laws to make the owners of the cattle  more responsible. But, nothing has changed since then.

An  STMA official who  pleaded anonymity and his frustration last Tuesday    remarked : “ We have been talking about this matter for a long time and still we have not been able to eject the cattle and their owners to Whindo as we  planned.”

He  told “The Spectator”  that the cattle were to  have been relocated  from the  New Takoradi road to  Konfeku, but, “it appears  nothing is happening.”

“Indeed, the safety  of  the society should be our paramount concern. We need to take action and remove the kraal  near the GOIL Depot.” another source added.

A resident of Effia Nkwanta hospital quarters also confirmed that the  animals came to graze in the area and evem destroyed crops of some farmers  near the GBC offices.

Meanwhile,  residents   at    the  SSNIT  Flats  and   the  Anaji   Estates have also complained about the  nuisance posed by herdsof  cattle  grazing in th area.

The Spectator  gathered that there is a  kraal established in the  bush  behind Block I at the SSNIT  Flats and the   frontage  of  Block  H  and the environs including the Anaji cemetery.

As  the cattle  passed through  the  neighbourhoods, they destroyed  crops,gardens and posed a threat to   children who  played  in the   open  places.

The  Assembly member  of the AnajiElectoral area, Mr John Davies, also said: “We  have  reported   the  matter  to  the  assembly   and  we  think  that,  those  involved   should be given  an  ultimatum to relocate  the  kraals  in  the  houses  and  also  not allow the animals to move in   the neighbourhood.”