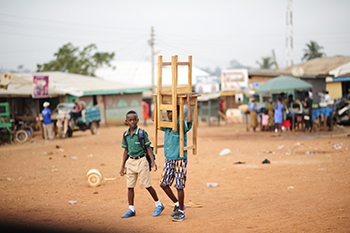 As pupils across the country return to school after nearly 10 months of closure due to COVID-19, the challenges of inadequate infrastructure have still resurfaced.

Ahead of the re-opening last Friday, some students and pupils in the capital, Accra, had prepared their classrooms and were ready to continue academic work which had been suspended for awhile.

Our photographer, Ms Lizzy Okai captured some students at the Accra Academy as they went through inspection and observation of safety protocols.

She had earlier visited the Emmanuel Presby Preparatory and Junior High Schools at Dansoman where the students were cleaning the environment. Thermometer guns, Veronica buckets, alcohol-based sanitisers among others were on site, with health personnel on standby to handle suspected COVID-19 cases.

Government had already fumigated a number of public schools and procured Personal Protective Equipment (PPE) for students and pupils ahead of their return. But other schools have complained that, the PPE were yet to reach them.

Another photographer, Mr Geoffery Buta reports that some pupils at Jeninso in the Amansie West District of the Ashanti Region still carried tables and chairs on their heads to their respective classrooms to study.

In view of this, some parents have appealed to the government to come to the aid of the deprived schools and also fast-track the supply of PPE to schools where supply had delayed.

Besides, some parents have also threatened not to take their wards to school until they were satisfied with the safety arrangements for their wards.

Story and Pictures by Lizzy Okai and Geoffery Buta