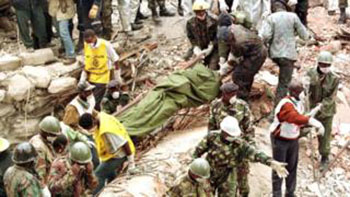 Sudan is required to pay punitive damages to some of the victims of the 1998 embassy bombings in Kenya and Tanzania carried out by al-Qaeda, the US Supreme Court has ruled.

More than 200 people died and thousands were injured in the attacks.

Sudan was accused of giving al-Qaeda and its leader Osama Bin Laden technical and financial support.

The Supreme Court ruling applies to US nationals, embassy employees and contractors.

The ruling comes at a time when Sudan’s new government is pushing to be removed from the US’s list of state sponsors of terrorism.

The unanimous decision by the Supreme Court means that about $800m (£650m) out of the more than $4bn that was awarded in punitive damages in 2011 has been reinstated, Christopher Curran, who was representing Sudan, is quoted by the Reuters news agency as saying.

Nine years ago, the judge in the Federal District Court in Washington said that Sudan should pay roughly $6bn in compensation as well as the $4bn in punitive damages, the New York Times reports.

In 2017, Sudan successfully challenged the ruling on the punitive damages arguing that they were awarded under a 2008 amendment to a law that could not be applied to something that happened 20 years earlier.

The Supreme Court decided on Monday that Congress had said it was possible for it to be used retrospectively.

“As always, Sudan expresses sympathy for the victims of the acts of terrorism at issue, but reaffirms that it was not involved in any wrongdoing in connection with those acts,” Mr Curran said.

The case of punitive damages for Kenyans and other nationals who were not directly employed by the embassies, as well as non-US relatives of any of those injured or killed in the attacks, was referred back to a lower court.

Matthew McGill, who was representing some of the victims, said: “We are hopeful that this soon will lead Sudan to reach a just and equitable resolution with its victims.”

The $6bn compensation was not in dispute in this case and in February it was reported that Sudan was in negotiations over the sum to be paid.

At that time, Sudan had agreed to compensate the families of 17 US sailors who died when their ship, the USS Cole, was bombed by al-Qaeda at a port in Yemen in 2000. -BBC