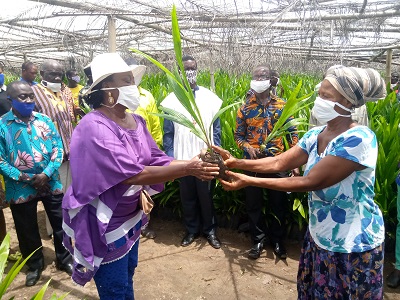 The Suhum Municipal Assembly has distributed a first batch of 50,000.00 free oil palm seedlings to 120 farmers within the municipality for cultivation.

The oil palm seedlings for the first phase exercise were nursed within six months at a cost of GH¢65, 000.00.

Each beneficiary received 416 seedlings to cover about seven acres of land.

Distributing the seedlings to the farmers, the Municipal Chief Executive, Mrs Margaret Darko said the government recognised the important role of agriculture in the growth and development of the country.

She said the Planting for Export and Rural Development programme was initiated to commercialise farming in the rural communities and to support farmers within the municipality as part of the government’s commitment to alleviating poverty.

She said enhancing the capacity of farmers to cultivate more farm produce to feed their families, Ghana and for export to help build a stronger economy had been the desire of the President, Nana Addo Dankwa Akufo-Addo.

The MCE indicated that the New Patriotic Party government recognised the contribution of agriculture towards growth and development of the nation and had since been implementing flagship programmes, including Planting for Food and Jobs, Rearing for Job and Export.

She advised residents of the municipality to eschew politics and support all government developmental programmes.

Mrs Darko commended the government for the initiatives which were farmer-friendly and had the potential of alleviating poverty in the country.

For his part, the Suhum Municipal Director of Agriculture, Mr Samuel K. Dzisah said the seedlings were procured from the Soil Research Institute at Kusi and nursed in two separate communities at Okurase and Zor for distribution to the beneficiary farmers and advised the youth to take advantage of the all-important opportunity to enrich themselves.

He said the Department of Agriculture remained resolute to provide any needed assistant to all farmers to reap the benefits of the project.

He indicated that farming was a lucrative business which the youth must endeavour to engage in, adding that it was not a means of punishment as portrayed by some Ghanaian youth.