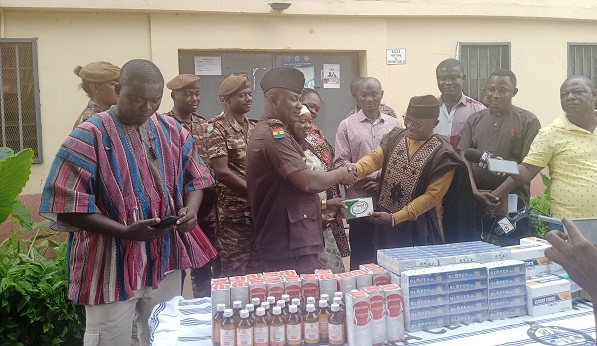 The Public Relations Officer (PRO) of the Ghana Prison Service in the Upper West Region, Assistant Superintendent of Prisons (ASP) Joseph Kpiriko has appealed to non-governmental organisations and other benevolent bodies to support the feeding of inmates at the prison.

He mentioned that the daily cost of feeding inmates which was pegged at GH₵1.80 per head was woefully inadequate to provide quality and nutritious meals for the inmates and called on the public to assist government take care of the convicts.

The PRO stated this when the Narcotics Control Commission (NARCOC) in the region donated assorted medical drugs to the Wa Central Prison to enable it stock its infirmary and sufficiently treat patients.

The drugs mobilised by the Commission from various pharmaceutical companies comprised 4,800 tablets of Ibudol plus, 150 tablets of albendazole USP 400, 600 tablets of Lufart Forte, and 60 tablets of Tininadazole 500 for treating malaria, general body pains and other first aid needs.

ASP Kpiriko explained that although there had not been a day that the inmates had gone without food, the quantity of meals served was not adequate but could be improved if they received food donations and other welfare needs.

He described the gesture by the NARCOC as ‘heaven-sent’ and timely and made a call to the public for donation of more drugs to the prison.

He stated that prior to the donation, the infirmary at the prison could barely treat sick inmates due to the shortage of essential drugs and said although some of the inmates had skin infections that needed attention, there were not enough drugs to treat them.

“We have an infirmary and three trained nurses who are officers so we are able to handle some of the ailments and also admit sick inmates temporarily, however, if the patient requires further medical attention, we take them to a general hospital”, he said.

Narcotic Control Officer (NCO) Issahaque Bakuri for his part said that the donation was to meet an earlier request by inmates for drugs to stock their infirmary as according to them, there were no drugs to treat common sicknesses.

He said that a greater number of the inmates were youth and needed sympathy, love and support from the public to make them feel at home and have the urge to turn over a new leaf.

NCO Bakuri said that NARCOC was working harder to mobilise more drugs and mattresses for the inmates.

The officer disclosed that aside the donation, the commission as part of its mandate provided regular counselling services to inmates with narcotic drug addiction to help them break the addiction.