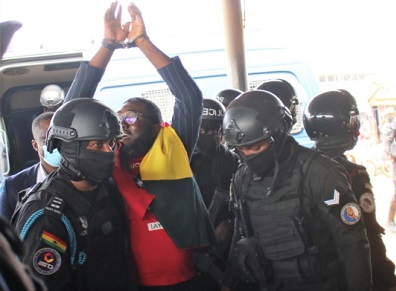 The Supreme Court is expected to hear a case seeking to overturn a Tema High Court ruling regarding the retention of #FixTheCountry convenor, Oliver Barker-Vormawor, in police custody today.

Lawyers for the activist are pursuing this matter on the back of the fact that the judge, Daniel Mensah, did not order that the Inspector General of Police (IGP) and Attorney General justify his continuous detention.

They want the Court to determine whether the Police have discharged their constitutional duty by sending their client to a court with no jurisdiction to consider a bail application.

According to them, the ruling of the High Court ‘B’, Tema, dated February 17, 2022, entails a grave error of law which error is patent on the face of the record.

The application filed by the brother of the activist, Elinam Philip Vormawor, also insists that the Cambridge PhD student’s plea was not taken nor was a bill of indictment presented even though the charges were read out.

The applicants are, by their motion, praying the Court to exercise its discretion to grant the following reliefs:

a. “Make an order of certiorari to issue to the High Court ‘B’, Tema, to bring up to this honourable Court to have quashed its ruling dated February 17, 2022, which was given under the hand of His Lordship, the judge, Justice Daniel Mensah, J., refusing to issue a writ of habeas corpus subjiciendum in respect of the Detained directed at the Respondents, their agents, assigns and workmen howsoever described or styled.

c. “Issue a writ of habeas corpus subjiciendum in respect of the Detained directed at the Respondents, their agents, assigns and workmen howsoever described or styled.”

On Monday, February 28, the Ashaiman District Court ordered the removal of Oliver Barker-Vormawor from its premises.

The youth activist had engaged in heated exchanges with the magistrate, Eleanor Barnes Botwe.

His lawyers, led by Justice Srem Sai, had inquired about the Court’s authority to deal with matters that affect the liberty of the Cambridge PhD student.

Barker-Vormawor was later heard lashing out at the ongoing legal processes against him, describing it as a sham.

“We have not asked for bail. This is a kangaroo process. The bench has not covered itself in glory. I am not going to glorify a sham,” he yelled.

This made the magistrate order his removal from the Court. However, the Court ruled that it had jurisdiction to handle the current processes filed by the prosecutors.

Mr Barker-Vormawor was charged with a treason felony on February 14, 2022. This is an offence provided for in section 182(b) of Ghana’s Criminal Offences Act.