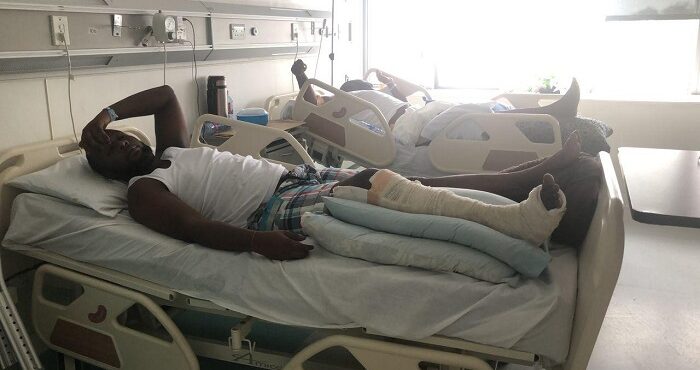 • Hakiku in POP on admission

A-40-year-old Madina-based trader in Accra, Mohammed Hakibu, has been bedridden for nearly a year following his attack by an angry mob on suspicion of being a gay.

Hakibu, who is currently on admission, said that he had not been able to work after the incident. The case was reported to the police at Madina but no arrest has been made as of now.

Narrating the incident to The Spectator, he said he met some friends (who were later rumoured to be part of the LGBTQ group), at an Islamic wedding in February 2021.

He said that in the course of the event, they hugged and held hands together most of the time, heartily chatting and joining in the merry-making.

According to him, he did not know that his own friends and neighbours at the event had read meanings into their show of affection for themselves and drawn had a conclusion that Hakibu (who even had a serious fiancée) was gay and, they launcheda deadly attack on him at home in order to, as they claim, “punish me for being a bad Muslim.”

He claimed he was attacked by an irate group one day and mercilessly beaten thus rendering him unconscious whilst at home with his fiancée — one Rose Diabo.

“They attacked me in my house together with my fiancee and she also sustained head injuries. It was late at night andwe were even asleep when I heard loud bangs on the door; so I went to open it and about 20 fully-armed men, many of whom were my childhood friends, pounced on me without hesitation,” the victim narrated his ordeal in tears.

Surprised by their unwarranted actions, he demanded an explanation as they kept beating him before he got to know that his attackers were accusing him of being gay and having gay friends who hesometimes harboured in his house, which wasan abomination in their community.

He vehemently denied the false charge, but to no avail.

“They used clubs, sticks and cutlasses to attack me and even broke my leg whiles beating me. It was my fiancée who disregarded her pain and called for a vehicle to convey us to the hospital,” Hakibu said.

Now, a-year-and-half on, the visibly injured Hakibu has remained bedridden yet to get back on his feet, having spent all his earnings on medication without any income since he has not opened his petty trading shop at the Madina market, all this while.

“It’s sad the way we handle people we accuse of any crime even before verifying in this country; we are too quick to judge people. Even if being gay was a crime and I was one, what they did to me should never be done to anyone, it was horrible,” the victim lamented.