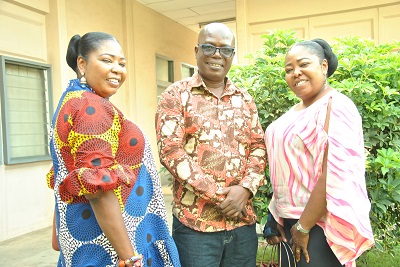 Ghanaian gospel music legends, Tagoe Sisters, are putting their acts together to stage a virtual concert to support the needy as part of their humanitarian initiatives.

Expected to roar off by the end of November, the concert would serve as a platform for them to release their maiden song for the year as well as raise funds to support the needy in December.

The smashing musical twins — Lydia Dedei Yawson Nee Tagoe and Elizabeth Korkoi Tagoe, made this revelation when they called on the new Editor of The Spectator, Mr Emmanuel Amponsah, on Monday.

According to them, their Tagoe Twins Foundation takes care of needy twins and the vulnerable, adding that they have adopted a lot of needy people, and taken care of some twins who have completed university, while others are undergraduates.

The gleaming duo called on churches to support gospel musicians to help the growth of ministry, adding that some churches did not properly remunerate artistes they had invited  to perform for them.

They hold the view that gospel music is an essential tool in soul winning and instrumental in every church; for that reason, attention must be paid to that department.

Citing some of the treatment meted out to gospel artistes by some churches, they said, at times the auditoriums were even rented out to them (artistes) for their album launches, and were also asked to pay electricity bills, among others, after using the artistes for free on numerous occasions.

“During our Adonai Concert, there is a church we used to go most of the time; we sent them 100 tickets to sell to over 1000 congregation, and sadly, they sold only one ticket as they refused to announce the tickets to members,” they disclosed.

According to them, as a result of these challenges, most gospel musicians have now resorted to managers, to avoid direct contact  with the church leaders to ensure that pastors or churches that need their services to pay what is due them.

To them, these things did not augur well for the growth of gospel music, adding that “the church needs to help musicians, because they need a lot of financial investment for music production and promotion.”

The duo further advised gospel musicians to look for side jobs to be able to raise a lot of money for the needed projects they set to embark on.

Touching on what made them fulfilled, they said: “What makes us fulfilled is we are still alive together in the ministry, and taking care of our foundation to put smiles on the faces of needy people.”

They disclosed that there was a re-branding and outdooring of Tagoe Sisters Ministries, hopefully next year, among other musical projects, which were shelved as a result of COVID-19.