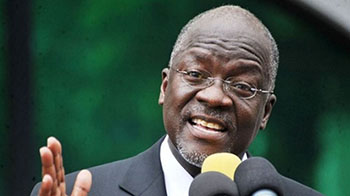 Tanzanian President John Magufuli on Sunday urged members of the public to stop fearing the COVID-19 pandemic but he said they should continue observing protective guidelines issued by health authorities.

Magufuli made the appeal when he attended Sunday prayers at a church in his native town of Chato in Geita region, said a statement by the Directorate of Communications at State House.

According to the statement, President Magufuli urged Tanzanians to continue working hard, especially in mass production of food saying neighboring countries which were on lockdown will need food supplies when the lockdown was relaxed.

The president reiterated his decision to rule out a lockdown and closure of borders because he said doing so will affect production, implementation of projects and other economic activities, said the statement.

He appealed to religious leaders to conduct prayers for three consecutive days from next Friday, Saturday and Sunday to thank God because COVID-19 infections in the east African nation have started to go down.

The president said if the trend of recovery continued persistently he will soon reopen universities, adding that he was also thinking of resuming sports events.

Magufuli also ordered the Ministry of Natural Resources and Tourism and other relevant authorities to allow tourists who had planned to visit Tanzania. “You should not stop planes bringing tourists in the country,” he said.  -Xinhua