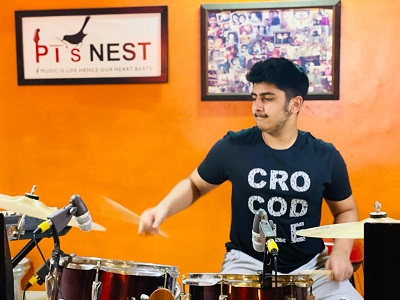 The teenager, who represented the Indian community in Ghana defeated  other competitors from different countries to emerge the ultimate winner of the category.

Aayush, who is 14 years old and a pupil of the the Delhi Public School at Tema, Community 25 gained popularity last year after he parttook of the composition of the popular ‘Coffin Dance Memes’ video which went viral on social media.

He became an instant drumming sensation in the Indian community in the country due to his unique style on the drums.

He regularly records musical videos  and shares on social media  for his fans and other music lovers.

Father of the drumming sensation Mr P.T Ramdass in an interview with The Spectator said “As parents, our primary responsibility is to help our children identify their passion and preserve their originality.

Aayush was very passionate about drums right from the tender age of four and we bought him a completed drum set when he was six years. Initially we arranged a teacher for him for a few weeks but the teacher was not regular.”

He explained that  Aayush picked up on his own and started playing rhythm for some of  Mr  Ramdass’ Guitar Instrumental.

He said, to fuel the passion of his son, he encouraged him to do stage shows at every opportunity and  “here we are, a Father-Son Duo who do one recording every weekend and share within our WhatsApp groups and Instagram.”

He revealed that Aayush was invited to perform at the inauguration of an Indian Restaurant named ‘Meet N Eat’ and was gifted an Octapad in appreciation of his outstanding performance.

Mr Ramdass said  that he had a  band called PT’s Nest which is quite famous in the Indian community in Ghana.

He revealed that Aayush “aspires to be like the prominent Indian drummer, Mr Sivamani who is well known internationally for his talent in drumming.”

He expressed gratitude to Ghanaians and Indiana for their support over the years and assured that there was more to come from the camp of his son, Aayush.