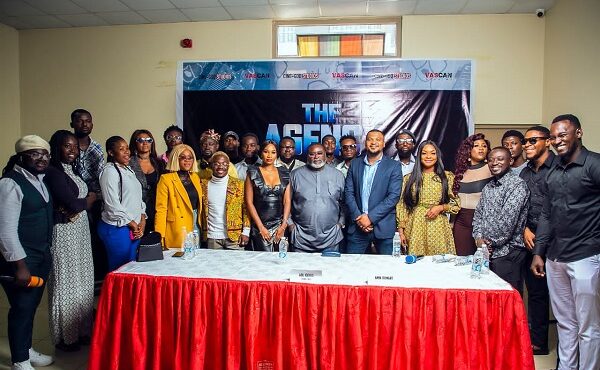 ● A group photograph of cast and crew in the movie

When a government security agency that handles covert and topnotch operations to protect the nation is sabotaged by an insider and becomes a tool for shady back-door dealings under its leadership, who dares to save its integrity?

This is the theme around the new Ghanaian crime-action movie; “The Agency” set to be premiered on October 1, 2022 at the Silverbird Cinemas (Accra Mall and Westhills Malls) and other theatre halls across the country.

It primarily projects ‘good over evil’ and is a departure from the usual drama and romantic stories often produced by Ghana’s industry players.

“THE AGENCY” is a thrilling action-packed movie which uses hyper-realistic action design with over 60 percent live practical effect by a 100 percent Ghanaian cast and crew.

At a press launch of the movie, the Director of the movie, Abu Iddris said the main goal of the production was to entertain movie lovers with “something refreshing and out of the ordinary.”

“Fuelled by our absolute passion to make that one film that represents the change the Ghanaian cinema-goer has been waiting for, we are proud to say THE AGENCY movie has a lot of thrills and chills to give the audience more than value for money and to dare skeptics of Ghanaian filmmaker’s potential,” he stated.

More importantly, Mr Iddris said, the movie was expected to inspire Ghanaians to unite against any form of abuse, cruelty and injustice by people entrusted with power.

The Executive Producer of the movie, Amin Ramart, said the potential of the Ghanaian creative arts industry cannot be overemphasised.

He said, given the needed support and resources, actors from Ghana could match their counterparts on the international front and attract desirable outcomes for the country.

Mr Ramart assured that his company would pursue more of such genre of movies and appealed to all and sundry to support the Ghanaian movie industry to thrive.