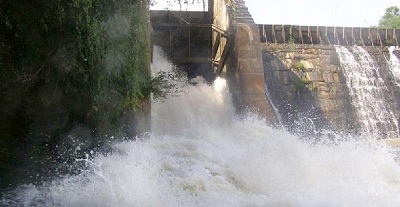 I live in a flood prone area of Accra. I have lost a couple of hundred prized books, including a hard-drive containing the first seven chapters of a book I had begun writing, household items and diamonds to flooding. I know how it feels to begin life from ground zero after acquiring possessions over thirty-five years. It is not something I wish for anyone to experience; natural disasters of any kind.

Just a couple of days ago, Burkina Faso experienced over seventy-five centimeters of rain in one day and so that country was compelled to open the spillways of the Bagre Dam on the Black Volta and the Kompienga Dam, releasing excess water into Ghana. When this happens, all regions in Northern Ghana are affected. Places already affected are in Lawra, Wa East and West, Daffiama, Nadowli, Jirapa, Savelugu, West Mamprusi, Mamprugu, North Gonja and Kumbungu Districts or Municipalities.

The people mostly affected are farmers, whose farms and dwellings are destroyed, making them poorer. This has become an annual ritual. As a nation, we all know that the northern sector of this country is our food basket; feeding us our yams, groundnuts, shea, millet, upland rice, onions, tomatoes and many more. My question, therefore, is: why do we witness this yearly ritual of seeing our compatriots up north go through this?

Already, reports from research groups forecast food shortage in Ghana in the coming days due to the floods in the north of the country. I must admit that the situation has been compounded by torrential rain in northern Ghana itself, but that is no excuse for our inability to find a lasting solution to this flooding menace.

Hurricane Ida just hit the southern coast of the United States, especially the State of Louisiana. It is an annual occurrence of nature, not man-made as in the case of the two dams in Burkina Faso. Americans are not happy about this hurricane menace, but there is nothing they can do about nature’s fury, so what they do is prepare adequately to mitigate its effect by putting warning systems in place for the citizens of the affected areas.

The music capital of the world, New Orleans is hard hit be this hurricane just as many other southern states of the Union. But they are prepared; they take measures to brave it all even if the disaster overwhelms them. The whole nation is alert to the annual occurrences. When the tornado (or twisters as they are called) season comes, America is prepared.

They have constructed storm drains so that as soon as the tropical squall passes, the water drains off into the drains and goes into the ocean. There is not a single storm drain Ghana can boast of, though someone tells me there is one under the Kaneshie Market in Accra. Ghana is never prepared for situations like these.

Bagre, on the other hand, is not a natural occurrence. Nature does not open the spillway; men do. This has been happening since the Bagre was constructed in 1999 and our leaders have not found a permanent solution to this problem. Who am I to suggest to a sovereign country like Burkina Faso to dredge and deepen the Black Volta so their dam can take in more water, though it can be done?

What Bagre unleashes on Ghana is nothing compared to disasters elsewhere, but because those affected are poor peasant farmers, the effect is grave. As I write, how many Ghanaians are aware of this yearly ritual of flooding from the two dams in the north of our country? Our journalists are busy with political stories to notice the humanitarian catastrophe that befalls the very people who produce food to feed us. It is only our national newspapers carry this, albeit on their back pages.

Our National Disaster Management Organization (NADMO) alerts the people to the danger only after the Burkinabe authorities announce plans to open the spillways. Our leaders have since 1999 done little or nothing to solve this problem. We have pet projects that give no benefit whatsoever to our compatriots in need of permanent solutions to their collective problems. A news item I chanced upon stated that the Police have been deployed to some of the flooded areas in the north. Police?

In almost all jurisdictions I know, fire fighters are the first responders to any form of disaster. The Police only come in to maintain law and order. We have NADMO, but is that organization well equipped with the requisite manpower training and resources to do what must be done in such circumstances?The Police?

If Libya could build an artificial river in the desert, can we not borrow money to construct the largest water reservoir ever to harvest the spilled water from Bagre and Kompienga dams? This is achievable if our leaders avert their minds to it. Water from the reservoir could last a farming season when the water is used to irrigate the farmlands through construction of canals.

On the other hand, when water levels fall behind these two dams Ghana can sell the water in the reservoir to the Burkinabe to raise the level in their dams. I am told reverse engineering can make this possible. Can we imagine what benefits will accrue to this country when the north can produce food crops all year round?

This is not supposed to be a political or partisan issue. It is an issue of leadership. But when there is election, our politicians go to campaign in these very areas to be given the chance to either go to Parliament or the Flagstaff/Jubilee House. But as soon as they are given the votes, the people are left to their own fate to fend for themselves. I implore the opinion leaders and people of influence in those areas to make this annual ritual an election issue if the problems are not solved before then.

Until we hold our leaders by whatever will make them act on our behalf, they will always take us for dunces. While we take our leaders on, let us also be mindful of what wisdom we think we possess. When I was growing up in Koforidua, there was not a single case of flooding in the municipality until only recently. In our wisdom, we have tiled all our residential compounds to the extent that there is virtually no surface soil to soak in rain water. As a result, there is flooding at the least precipitation. So it is in Accra and all other urban environments.

But how long shall we live with the Bagre ritual?