The funny side of Ghanaian politics 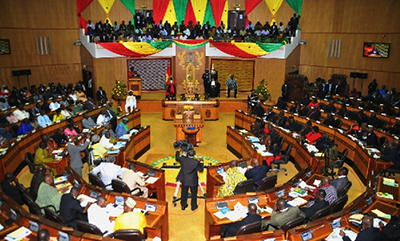 A couple of weeks ago, I went to collect something from my sister at her home because I left it there when I visited the previous day for a family event. When I got there, my niece who is about five years old was in the yard, so I called out to her through the gaps in the metallic gate and asked her to go and call her mother to come and open the main gate for me, to enter with my vehicle.

Her mother came out and she said, “The man you referred to as ‘Papa No’ is your uncle.” Apparently, she went to her mom and told her that, the man who came here yesterday, is at the gate asking you to come and open the gate for him. Now when you mention ‘Papa No’, it becomes a sensitive word and someone who is politically inclined will either laugh or become offended depending on which party the person belongs.

According to news reportage, the term became an issue as a result of banter between some ladies on social media who were apparently fighting over a sugar daddy. Another lady who was a friend to one of the quarrelling ladies, referred to him as ‘Papa No’.

It was further brought into the public arena and became a topical issue when a popular Ghanaian musician called Sidney, came out with a song entitled ‘Papa No’. Since then, ‘Papa No’ has been trending on social media and has generated a lot of buzz all across the country. The funny thing is that no one has categorically mentioned the name of the person being referred to as ‘Papa No’, who it is believed to be a big shot in Ghanaian politics.

A funny incident recently occurred in parliament, to be specific, last week Friday, when parliament was debating a bill for approval or otherwise, concerning the financial vehicle known as the Agyapa Mineral Royalty Bill to deal with royalties from our mineral sector, to raise urgently needed funds for government. During the debate, the MP for Yapei–Kusawgu, John Jinapor, was against the approval of the bill and forcefully gave his opinion in support of his position.

Immediately afterwards, the current Minister for Information who is also the MP for Ofoase- Ayirebi Constituency, Kwadwo Oppong Nkrumah was given the floor. He eloquently enumerated why the bill must be approved. He then ended his submission by saying that “if the man who just spoke who is a good friend of mine, and Mr Speaker in my hometown we say ‘Papa No’ ‘Papa No’ …”, suddenly all hell broke loose.

There was uproar of laughter on the Majority side amid shouts of ‘Papa No’ and indignation on the side of the minority. The Public Accounts Committee (PAC) Chairman got up to implore the Speaker of Parliament to ask the Minister of Information to withdraw that reference of ‘Papa No’ and when the Speaker appeared not to be paying attention to him, the Minority Leader then got up.

During the period leading to the 2016 elections, a term appeared in the political space which was a reference of one of the then presidents to one of the chairmen of the opposition parties. The term ‘Opana’, became a topical issue and the usual political jabs were being thrown back and forth across the radio waves and social media. Ordinary folks started using the term to crack jokes and during phone-in sessions on radio, serial callers had a field day with the word.

‘Domestication’ was a term that became a word on the lips of everyone many years ago, due to its use by the late Mr Dan Lartey who was then an independent presidential candidate in 2008 elections. He became known as Mr Domestication and was all over the airwaves. He was quite a character and a jovial one at that which endeared him to the hearts of many Ghanaians until his passing. He was quite happy that people were calling him Mr Domestication and it did not bother him at all. Just like what we experienced at school, the more you react violently to a nickname, the more it encourages colleagues to call you by that name.

‘Papa No’ has become a hot item due to the attempt by people who are supporters of former President Mahama and who seek to defend him by saying that he is not the person the lady referred to as ‘Papa No’. Till they realise that this is not going away until they stop pushing back, the ‘Papa No’ will continue to be the topic for discussion for a very long time. It also has a nice ring to it and so people are prone to creating fun with it.

The funny thing also is that, it is a word that is often used in the Twi language, and so its use has caught on with a lot of people. Now one needs to be careful in the use of ‘Papa No’ otherwise you can easily be classified as an opponent of NDC due to the highly polarised political environment currently existing in the country, and more so as we approach the elections.
Given the sense of humour of Ghanaians, we have not seen or heard the end of such terms and name calling, and the earlier we got used to it the better.
AVERAGE CITIZEN