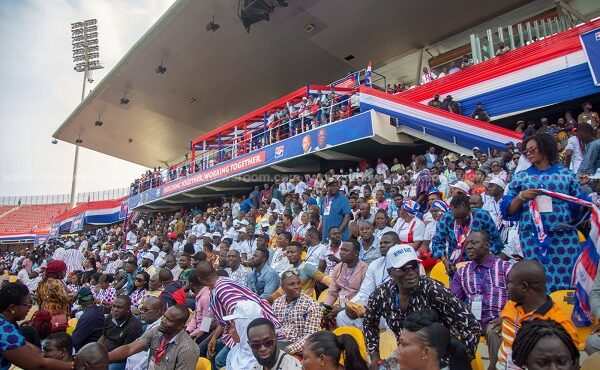 • President Nana Addo Dankwa Akufo-Addo (middle) with the new NPP
National Executives Inset: A section of the
delegates at the conference

The new Patriotic Party (NPP) has always used the electoral principle for the selection of its officers to serve on various capacities in the party. Beginning from the polling station as well as all the constituency and regional levels, the party has successfully carried out internal elections to select the candidates to serve.

The just-ended delegates conference dealt with officers who are to serve at the national level including the position of National Chairman, General Secretary, Women’s Organiser and Nasara Coordinator, among others

The electoral principle adopted by the party as is done elsewhere is good for a number of reasons. In the first place, it allows candidates to freely offer themselves for selection by the party delegates. Additionally, it ensures that the delegates are given the chance to freely select candidates who, in their view, are qualified and fit to play different roles in the party.

Again, the electoral system helps to prevent the imposition of candidates on the party. By preventing imposition of candidates on the party,members are always encouraged to come out freely to support all programmes and activities organised by the selected officers. In addition to all this, the electoral principle brings about openness, transparency and helps to promote unity among family (party) members.

The just-ended conference was well organised. The choice of the Accra Sports Stadium was good because the venue was able to accommodate all the delegates as well as the party leaders and officials invited to carry out certain activities. This ensured that the atmosphere was condusive for the purpose of party political activities.

In the same way, the security of delegates was also ensured. In all, about 3,000 policemen came to provide security at the Accra Sports Stadium. The security was important because it guaranteed protection of the party officials and members from being attacked by any unscrupulous persons who may want to come in and create problems.

The officers from Electoral Commission who came to supervise the elections also played their role well so at the end of it all, the conference proved to be very successful. The success has sent positive signals not only to all parts of this country about good political party organisation but also to other parts of Africa and even the rest of the world. It has gone to re-enforce the view that the democratic credentials of Ghana regarding political party activities grow from strength to strength, making it enviable for the rest of the world

The nature of the campaign required by candidates who offered themselves for the elections was laborious because being a national election, each candidate was expected to go round all the 16 regions of Ghana and mount their campaign to solicit support for their election and re-election. At the end of the day, some of the candidates won the election but others were not fortunate enough to win. It was an endeavour meant to select the best candidates for the various positions declared by the party.

For this reason, all victorious officers ought to extend a hand of friendship in line with the desire for unity to all candidates who were not successful. This is important because it is an internal party affair that must not be allowed to degenerate into party disunity and destruction.

Similarly, all those who participated in the elections must know that they are one people belonging to the same political stock who are vying for victory in 2024. It is, therefore, important for the new chairman, Mr. Steve Ayesu Ntim as  well as the General Secretary Mr Justin Frimpong Kodua and all other officers who won their positions, to come together for party unity, progress and development for the good of the country. This is how as a country, Ghana can portray itself as a politically mature country with a high degree of tolerance for one another with the NPP as a peaceful political organisation.