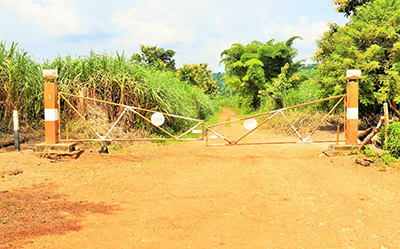 Thugs have taken over the various unapproved paths and stretches of ‘no man’s land’ between Ghana and Togo, intercepting traders who flout the border closure to either rape them or to extort money from them.

They usually target market women from the Ghana side of the border who continue crossing the border into Togo day and night to buy vegetables in large quantities for resale in Ghana, in spite of the official closure of the frontier because they are cheaper there.

Some of the gangsters are raking a fortune from assisting traders to cross the border and charging them big money.

For the past two weeks, however, the cross-border business by the market women from Ghana has fallen drastically as a result of the persistent threats of rape by the gangsters along the unapproved routes.

One trader from Ho, who spoke to The Spectator on anonymous grounds, said that the thugs often asked the illegal cross-border traders to choose between paying huge fees for assistance to cross the frontier or get ready for gang-rape in the bush.

Some of the traders, she said, have now folded up their businesses due to the danger along the unproved paths.

According to other traders, some of their colleagues, who fall victim to the criminals along the unapproved border routes cannot report the matter to the police because “it all takes place on no man’s land.”

” We were so embarrased to report these incidents to our families and law enforcement agencies, “they lamented.

Giving details, they said. The hoodlums would extort various amounts of money from them and those who could not pay, were dragged into the bush and raped.

They said the activities of the tugs, if not checked quickly, would become uncontrollable.

Worse still, they said that the traders were afraid of getting arrested for attempting to flout the border if they report the matter  to the police on either side of the border.

Meanwhile, there are growing reports of a large number of Ghanaians trapped and distressed in their homes located behind the gates of the immigration check points which are located far away from the frontier.

This was evident last Saturday when members of the Volta Regional House of Chiefs visited the border town of Leklebi-Kame and other communities along the frontier.

At Honuta in the Ho-West District, the traditional authorities expressed misgivings over the activities of some organised thugs who were terrorising the natives and calling them ‘Togolese’.

At the Honuta Border Post, it emerged that dealers in food items such as cooking oil from Togo often left them on the border for the customers to pick without crossing the frontier.

This reporter was at the Ghana side of the frontier when two motorcycles arrived to deliver big gallons of cooking oil at the gate separating the two countries, before riding back into Togo.