Trump threatens to permanently freeze US funding to WHO 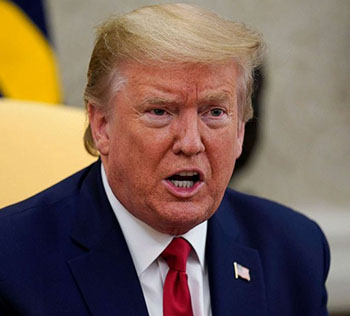 US President Donald Trump on Monday threatened to permanently cut off the nation’s funding to the World Health Organisation (WHO) if the body does not commit to what he called “substantive improvements within the next 30 days”.

In a letter to WHO Director-General Tedros Adhanom Ghebreyesus, a copy of which was published by Trump on Twitter, the president added that he could reconsider the US membership in the organisation.

The threat came as the world continues to combat the COVID-19 pandemic, which has infected more than 4.8 million people globally and killed over 318,000.

The United States alone has reported more than 1.5 million infections and over 90,000 deaths as of 4:03 pm (2003 GMT), according to a count by Johns Hopkins University. Both figures are far higher than those in any other country or region.

Trump announced in mid-April that his administration would halt US funding to the WHO, a roundly-criticised move that many experts have said was trying to shift blames and would be counterproductive to addressing the public health crisis.

Former US Vice President Joe Biden said Monday that time had been wasted in the US response.

“It’s heartbreaking to think how much fear, how much loss, how much agony could have been avoided if the president hadn’t wasted so much time and taken responsibility,” Biden told a virtual event. “We got denials, delays, distraction.”

Based in Geneva, Switzerland, the WHO is a specialised agency of the United Nations for international public health, which has played a crucial role in coordinating the global fight against the coronavirus pandemic.

During the ongoing World Health Assembly, many world leaders have strongly defended the WHO and voiced their support for the organisation to continue its leading in the coronavirus battle.

Robert Redfield, director of the US Centers for Disease Control and Prevention (CDC), praised the WHO in April.

“WHO has been a long-term and still is a great partner for us. We’re going to continue to do all we can together to try to limit this,” Redfield said. “We’ve worked together to fight health crises all around the world. We continue to do that.” -Xinhua