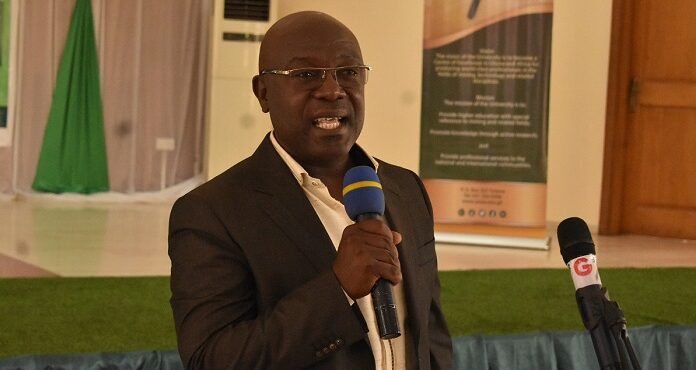 University of Mines and Technology (UMaT), Tarkwa in the Western Region, is set to undertake a project to clean major rivers in Ghana including River Pra, which have been polluted with mercury due to illegal  mining, the Vice Chancellor Professor Richard KwasiAmankwah, has said.

The innovation, he explained, “is to ensure sanity in Ghana’s water bodies, safeguard riverine life and maintain their integrity for sustainable development.”

Prof. Amankwah told journalists on Monday at a meet the press series at the  UMaT  6th Innovation and Career  Fair dubbed “Think Smart, Be  Innovative,”  as part of its 70th anniversary celebrations.

“These are very long rivers and if you clean them, the impact will be greater. Birim  is also  a   very  big river and I believe when  we clean  it,  the impact  will  the better. Then, later, we can look at Bia, Tano and  others,” he said.

Prof. Amankwahhad thrown a challenge to the Ministry of Lands and Natural Resources that UMaThad  the technology to  clear  all the rivers in Ghana which had been made dirty by small scale miners.

Discussions, he told journalists, were still ongoing and that, “anytime we get funds, we will select at least  two major rivers and clear them to show the world  what we are capable of doing.  We need a little push to get this one done.”

He said, mercury was widely used in Ghana and that when the chemical went into the atmosphere and settled on the ground, it interacted with bacteria and got soluble in water.

Prof. Amankwah said, mercury then washes  into  water bodies and crabs and fishes could take in the substance.

“When you go and catch a fish, it has mercury in it, and it is transferred into your body. Mercury can cause birth defects. It can influence the chromosomes of a human being.

“Therefore, when you give birth and because you have mercury  intoxification  in your system, you pass over something to that child that makes his ability to develop the  neurosystem very weak.” he explained

Already, he said, UMaT had started looking for plants in Ghana that have the ability to stop mercury   from the soil and from rivers and also developed a system to undertake phytoremediation of mercury from polluted lands.

The Vice Chancellor reported that UMaT’s members of staff and students had greatly worked  in  extending the frontiers of knowledge with the innovations and inventions, saying some experts were promoting clean water and sanitation  and clean energy.

He said, a PhD research student had   developed a tracking device to track activities  on  small scale  mine site across the country  and even at Walewale and that Minerals Commission had  commissioned UMat for that project.

The student, according to Prof. Amankwah, would receive about $250,000  for his creativity and ingenuity.