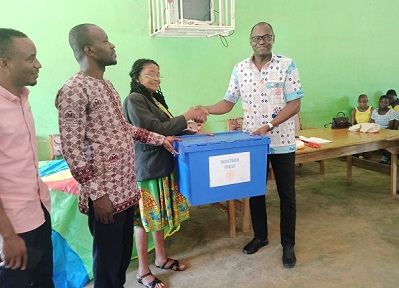 The Headmistress of the Wa Methodist School for the Blind, Reverend Grace Amoako has appealed to benevolent bodies and individuals to help put the school’s compound in good shape to prevent the rampant fall of pupils.

She explained that due to erosion, the school’s compound had been rendered uneven with small to medium-sized holes and gutters created everywhere around the compound, making it very difficult for the visually impaired pupils to walk freely.

The worrying situation, she said, had left many of the pupils with injuries around their feet and called for support to help put the compound in shape so that the pupils would enjoy free movement without hindrance.

Rev. Amoako made the appeal when the Rotary Club of Wa donated a sight box to the school to facilitate physical education (PE) lessons.

The box which contained assorted items such as goal ball, boccia grid, large hand ball, parachute canopy and running tethers, among others, was meant to aid the pupils in their extra-curricular activities.

“It is really disheartening to see the children fall every now and then when they are trying to move around because the compound is very uneven and these are visually impaired children, who do not even use walking canes”, she lamented.

She called for support to help put the school compound in good shape to ensure that the school children were better protected, but also used the opportunity to call for more donations of food and welfare items to help cater for their needs.

Presenting the items to the school, President of the Rotary Club of Wa, Mr Stephen Mwinkaara explained that the donation was to assist the pupils identify alternative ways of studying outside the classroom with the use of the items in the sight box.

He said that the club was dedicated to the wellbeing of the underprivileged and the marginalised in society as most of its interventions had been geared towards uplifting such groups, stressing that the club was going to work around the clock to secure more support for the school to aid it in other areas.

The donation was part of a project by the club to provide the boxes to the school at Wa as well as the Akropong School for the Blind in the Eastern Region with support from the Rotary Club of Southport Links in the United Kingdom.