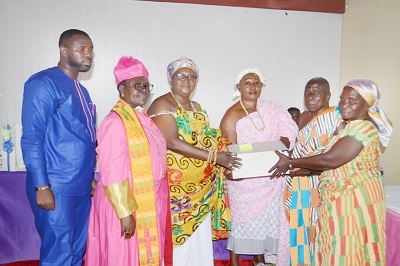 Fifteen distinguished married women have honoured their husbands with gifts to express their love for long and dedicated services and contributions to their stable marriages.

The celebration dubbed “Couples Appreciation Day” was under the theme “Remember like it’s yesterday’’.

The purpose of the programme was to create the awareness for married couple to understand the need to express their love while the other partner was still alive.

It was also an opportunity for married women to cherish and adore their husbands who had been able to marry them for a decade.

Among other criteria were a husband who practices monogamy, a husband who has been able to educate the children to the tertiary level and other responsibilities.

The longest couple had married for 56 years and the freshest among the 15 couples was only three months in marriage.

The crowning of the ceremony was the Diamond Award given to a couple who had been married for 60 years and given birth to 12 children out of which nine had survived.

Bishop Dr Dua-Agyemang Akoto addressing the gathering said “Most often a sweet tribute is read after the death of the husband to show that he was the best when he was alive.”

She said this platform was to enable spouses to express their love in a form of presentation of gifts to appreciate their husbands irrespective of the challenges they had encountered.

She said that gift was a language to express love and respect to the receiver.

Bishop Dr Dua-Agyemang Akoto said she would be reaching out to as many married couples as possible so that such an event could address some marital issues.

She noted the event was going to be organised twice in a year during Christmas and Easter festivities and the target group would be middle age and old couples to share their love stories for others to learn and fraternise since they have limited outing activities.

She called on well-meaning Ghanaians who have interest in sustaining and reconciling marriages to bring out the beauty in both Godly and socio-economic perspective to collaborate with her vision in achieving this feat.

The Dwantoahemaa of Sunyani Nana Boah Boahemaa applauded the initiative and indicated that it would help complement the efforts of the traditional authority in solving disputes.

Other women also presented gifts to special men who had made positive impacts in their lives.