Unity, diversity and the African Catholic Chaplaincy in Finland 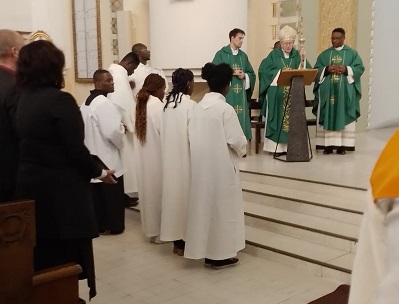 • Monsignor Emeritus Teemu Sippo and other

priests during the mass service

Last Sunday, November 13, 2022, marked an important milestone in ecumenism when a Thanksgiv­ing Holy Mass was celebrated by the African Catholic Chaplaincy in Finland (ACCF) at the Kallio (Lutheran) Church in Helsinki.

Monsignor Emeritus, Teemu Sippo S. C. I., the Bishop Emeritus of the Catholic Diocese of Helsinki, was the main celebrant.

The mass service was conducted in the presence of Bishop Teemu Laa­jasalo, the Bishop of the Evangelical Lutheran Church, Helsinki, Fr. Marco Passinato, the Diocesan Administrator of the Catholic Diocese of Helsinki, and the Rev. Reina Riikka, the Parish Priest of the Kallio Parish. Also pres­ent were other dignitaries, including Mayvor Wärn-Ranken, the Secretary General of the Finnish Ecumenical Council, Finland.

It was a unique occasion that brought together faithful Catholic, Lutheran and other worshippers and as a way of showing appreciation to the Kallio Church for their generosity of allowing the African Chaplaincy to conduct its mass services every Sun­day in the Church in Kallio, Helsinki.

The African Catholic Chaplaincy which has been growing, currently gathers in the Lutheran Church in Kal­lio for their Sunday mass services.

The event was, indeed, a well-at­tended religious occasion with unfor­gettable experience.

Unity in diversity and colourful display of cultures

There was an impressive display of diverse cultures from different parts of Africa and elsewhere. The event was spiced by a rich cultural display of dances and colourful attires which were a delight to watch.

Members of the Ghana­ian Catholic community,in their gay and colourful kente attire and with adowa dance and music, led the procession into the church. Other communities such as the Camerooni­an, Nigerian, Kenyan and Tanzanian as well as South Sudanese groups also put up well-choreographed performances.

The African Catholic Chaplaincy in Finland

The African Chaplaincy was founded on June 4, 2017, which was a Pentecost Sunday, in a Pontifical High Mass celebrated by Monsignor Emeritus Sippo S.C.I., the then Bishop of Helsinki, at the St. Mary’s Catholic Parish Church in Helsinki.

The Chaplaincy was created by Bishop Sippo to fulfil the desire of the Diocese to give African immigrants in Finland the possibility to be at ease and freely worship in their everyday lives in Finland.

The Catholic Church in Finland has about 15,000 registered Catholics, half of whom are native Finns. The rest of the Faithful come from at least 100 different countries from all five Continents in the world.

In all, there are eight parishes in Finland, with two in the capital city, Helsinki (St. Mary’s and St. Henry’s). There are also dozens of priests work­ing in Finland.

The formation of the Chaplaincy in 2017 was as a result of collabora­tion by then Bishop Sippo with the Diocesan body when they detected a great flocking of African immigrants to Finland, the majority of whom were Catholics, in order to give them a possibility to integrate into the Finnish society by worshipping as Catholics and in their African cultural identity.

The African Catholic Chaplaincy forms an important part of the Catho­lic Church in Finland and its Helsinki Diocese, which is the only Diocese covering the whole of Finland.

The African Chaplaincy as a struc­ture of the Diocese is thus fully under the responsibility of the Bishop of the Catholic Diocese of Helsinki.

After its formation, Monsignor Sip­po officially handed the responsibility of the African Chaplaincy to the Chap­lain, Reverend Father Leonard Wobilla Shwei, who is fully responsible on behalf of the Bishop and the Diocese for spiritual life and other activities of the Chaplaincy within the Catholic Church in Finland.