“Unruly” passenger escorted off flight after trying to enter cockpit 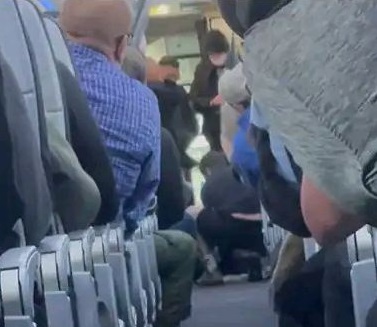 An American Airlines flight was forced to make an emergency landing after an “unruly passenger” attempted to enter the cockpit area and open a flight door, among other things.

Juan Remberto Rivas, 50, caused several disturbances on a Washington-bound flight causing the flight to be diverted mid-journey to Kansas City where it was met by law enforcement officials, according to news reports.

Footage shared on Twitter by another passenger, captured Mr Rivas being subdued by law enforcement officials. The video was taken after the flight was diverted to Kansas, where Mr Rivas was escorted off.

According to an eyewitness, a flight attendant had to use a coffee pot to subdue the passenger after he began acting erratically.

Mr Rivas, who is currently in police custody, “grabbed a small champagne bottle and attempted to break the bottle on the counter. He began kicking and shoving the service cart into one of the flight attendants,” according to a US Justice Department news release.

The release said he tried also to pull open the plane’s exit door. In response, “a flight attendant grabbed a coffee pot and hit (the man) twice in the head with it,” the release said.

Mr Rivas has reportedly been charged with one count of assaulting and intimidating a flight attendant.  -ndtv.com