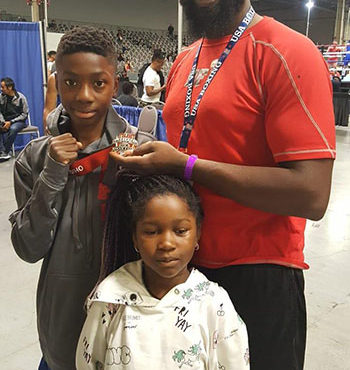 The US-based young pugilist, Awinongya  Jnr, who is also a philanthropist would financially support Anokye to undergo surgery to remove a spinal tumor which had affected her mobility and eventually thrown her into paralysis.

Little Anokye, a native of Kwadaso in Ashanti region, was diagnosed with spinal tumor at age four when she started experiencing immobility in her left fingers.

Anokye, due to lack of finance to correct the defect, has resorted to herbal treatment which further deteriorated her condition affecting her right arm and both legs, rendering her paralysed.

Awinongya Jnr, also known as Jojo saw the deteriorating condition of  the little girl on YouTube on and with the help of his Dad, Joseph Awinongya Snr, has decided to reach out and support.

“I showed the video to my dad and he asked me to choose between getting a Play Station 5 which I so much desire to have and supporting Paulina with the funds. I chose to help Paulina and forget about the Play Station because her condition gradually is killing her because of money,” Awinongya Jnr stated.

Jojo would pay for her medical assistance fees and give an undisclosed amount for her up-keep for four months after her surgery at  the Okomfo Anokye Teaching Hospital where she has been booked for surgery on today.

Jojo also appealed to the general public here in Ghana and in America to support Paulina financially to enable her go through the surgery and her recovery process successfully .

As part of their support to nuture young talents in the country,Awinongya Snr is working to invite another amazing juvenile boxer Hakeem Nii Nortey Lokko, who is also trained by his father Carl Lokko (Owner and headcoach of Bronx Boxing Club and Technical Director of the Ghana Boxing Authority) to Chicago to exchange boxing lessons and to be part of Jojo’s his ongoing documentary.

Jojo, who is currently rated number one and two in the 90lbs and 95lbs divisions in America, has won almost all competitions he has participated. He has shown superb exhibition of boxing artistry, rare display of boxing IQ, academic excellence and has become the toast of many in Ghana and Chicago where he lives with his family.