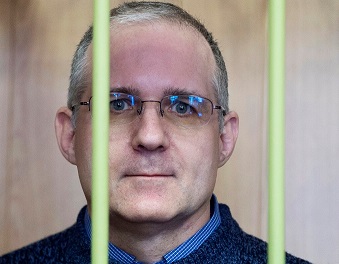 The US has said it is “outraged” after Russia jailed a former US marine to 16 years of hard labour on spying charges.

Paul Whelan was arrested in a hotel room in Moscow 18 months ago with a USB flash drive which security officers say contained state secrets.

Whelan says he was set up and called the trial – which he said he could not understand as no translators were provided – a “sham”.

US Secretary of State Mike Pompeo called for his immediate release.

“The United States is outraged by the decision of a Russian court today to convict US citizen Paul Whelan after a secret trial, with secret evidence, and without appropriate allowances for defence witnesses,” he said.

Whelan was found guilty of receiving classified information at Moscow City Court. His lawyers said he would appeal.

Amid suggestions that Whelan could be used in a prisoner swap for high-profile Russians in US custody, a Kremlin spokesman said Whelan was not a “political prisoner”.

“No, it is not possible. He was sentenced by a court decision, and the court decision says it all. He was charged and the charges were then proven in court and accepted by the court,” Dmitry Peskov said.

Paul Whelan had hand-written a sign for this final court hearing, pressing it to the glass of his cage in court to denounce his trial as a sham. TV cameras were banned from filming on Monday, supposedly as a coronavirus precaution.

So Whelan raised his voice to shout his innocence to the photographers instead. With two FSB [Russia’s Federal Security Service] guards at his side in black balaclavas, he denounced the charges against him as fabricated and “ridiculous”.

“They have got this so wrong, and all for political purposes,” he told the BBC. At past hearings, he has been openly angry and frustrated – talking over the judge and accusing his interrogators of threats and coercion.

On Monday, he was calm, even smiling – waving to the three ambassadors who came to court to support him, all in facemasks and gloves and carefully spaced out on the wooden benches like the press. -BBC