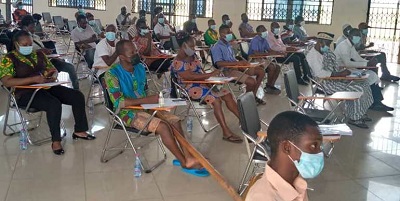 The Ketu North Municipal Director of National Commission for Civic Education (NCCE), Mr Prosper Afealete has urged the youth to use appropriate channels to address their grievances.

He was speaking at a youth activist workshop organised by the National Commission for Civic Education in collaboration with the National Security Ministry on “Secessionism and Violent Extremism, National Cohesion and National Development.”

Touching on Grievance Handling procedures: Public Order Act and Vigilantism, he admonished the youth to abide by the laws of the country.

He said the Public Order Act provided the right to freedom of assembly including freedom to take part in processions and demonstration, but this must be done in accordance with security agencies, such as the police for the sake of peace and security.

Mr Afealetey further revealed how vigilante groups were hiding behind some religious groups, NGOS, Keep-fit clubs among others to carry out their heinous crimes in communities.

“It will surprise you that, vigilantism is operated on different levels and in different forms these days and no longer with names that can easily be identified and dealt with. Some are even trying to use religious groups, keep-fit clubs and NGOs,” he said.

He advised the youth to be mindful of their associations and report crime to the appropriate authorities at all times for action to be taken against such threats to peace and security of the nation.

The representative from the National Security, Mr George Abizy Baffour also called on the youth to assist security agencies to deal with criminals in their various communities.

Speaking on “Peaceful Coexistence and National Development”, the Parish Priest of Dzodze, Rev. Fr  Frederick Sedo-Henyo advised the youth to “weigh their actions and not allow their emotions to control their reasoning.”

He identified indiscipline, culture of greed and selfishness, negative ethnic or cultural practice, among others as some of the threats to peaceful coexistence.

Former Volta Regional Police Commander, Togbi Bedi Ahiadzi lamented how some chiefs were being used by political parties to disrupt peace and development in their communities.

He tasked all traditional authorities to be true representatives of peace and unity in their areas and commended the National Commission for Civic Education for the effort in deepening democracy in the country.

Mr Tito Voegborlo, Secretary of the Commission, also encouraged the youth to remain patriotic and contribute to national development.

The workshop is being organised in selected districts to educate and equip the youth with basic knowledge and security tip on the activities of the secessionist groups.