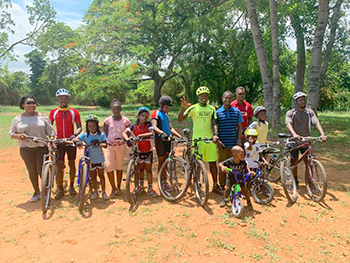 Autism, a serious developmental disorder, especially among children, that impairs the ability to communicate and interact is a major health concern not only in Ghana but across the globe.

The effects of the disorder impact largely on the development of children and often prevents them from having the normal playful childish life as compared to the supposedly ‘normal children’.

It also prevents them from engaging in physical activities especially sports.

The story is not different in Ghana, especially in the rural areas where such children are labeled as outcast and many of their age mates do not wish to mingle with them or play games together.

But that notwithstanding, 13-year-old Phil Bertino, Prince Effah, eight years, and Michael Djanie, three years; all autistic children have defied the odds and found solace in cycling.

The three young children with tutelage from one of Ghana’s top cyclists, Isaac Sackey, have taken up the sport and actually working to become professionals.

When the Times Sports visited their regular training grounds at the Legon Botanical Gardens, the three, along with other children rode their hearts out in a way that practically makes it difficult to differentiate them from the other children.

Excited with the journey of her ward in cycling, mother of young Phil, Mrs Angel Elizabeth Bertino, who came along with other parents to support their kids said, she was willing to push Phil all the way to the top of the sport.

She said the young lad has exhibited massive interest for the sport and that has impacted hugely in his upbringing in general.

Mrs Bertino who runs the Liztino Center for Children with Special Needs, added that, Phil started playing piano, tennis and basketball but anytime he saw people ride the bicycle, he was happy and wanted to join them.

“That was when I realised the interest in the sport and got in touch with Sackey to help four months ago and he has not looked back since. Research also shows that cycling helps with the development of their brains and it has really impacted as he could now read and does almost everything as his peers,” she explained.

“I want him to become a professional and travel across the globe for competitions. The mountain bike racing is usually an individual race and he could go anywhere he wants. He really loves what he is doing and I am ready to take him to wherever he wants to be,” she stressed.

Engaging in cycling, she said, has also helped Phil to reach 90% recovery from the disorder, adding that, with early interventions such as introducing such kids to sports would go a long way to help them live a normal life.

She urged parents with autistic children to get them involved in sports as it helps with their development and management of the disorder.

“Parents should avoid locking such children in their rooms because when they are supported and provided with the necessary things as any other kid, they could rise to the challenge. Phil is a happy kid now and can do a lot for himself and siblings,” she added.

“The acceptance of autistic children in Africa is not the best and efforts must be put in place to raise the awareness so they would be considered as part of society. The country and society as a whole has not been very supportive of children with autism and it is very terrible,” she stated.

She expressed appreciation to Sackey and the cycling fraternity for supporting Phil and other kids to become the best they could and urged other sports federations to also find a way to reach out to such group of people in society.

Father of Prince, an eight year old autistic child, Mr Kweku Effah, added that with just three weeks of riding, he has seen some positives in the child’s development, adding that the sky was the limit for the kid as he was also willing to support him to get to the top.

“They must be supported to unearth their talents. I think cycling is the right sport for these children. He used to ride around at home but now do so with skill. They can do wonderful things that normal kids cannot do; they can do exploits and must be supported to get to the highest level possible,” he added.

Mr Ebenezer Djanie, (young Michael’s father) said engaging his ward in cycling was part of the healing process but could consider making him a professional following his development.

“We need to understand the kids, accept them as they are and help them overcome what they are going through now. Government and other stakeholders must go beyond policies on paper and do more to support children with autism,” he stated.

The sports fraternity, he said, has also not accepted these people. They can excel in various disciplines because they have the potential and advised the authorities to develop special competitions for them.

For coach Sackey, it has been a delight training the kids.

He said they have extraordinary strength and learn very fast and practically does better than some normal kids.

“Phil is very good. He can do well and possibly become a champion in cycling in the near future. Such kids should not be kept in their rooms alone but rather be exposed to sporting activities and be nurtured to develop like any other talented child,” he stressed.

Aside creating jobs for them, he said, it could also help put them in good health and shape which was essential to their entire development.

Of a truth, this remains an area yet to be exploited despite having Special Olympic teams that only come to light when there are international competitions, but cycling has shown the light and other sports must follow to put smiles on the faces of the affected children.