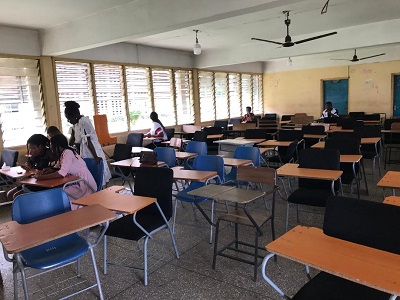 University Teachers Association of Ghana, (UTAG), embarked on an industrial action on Monday, August 2, 2021, to demand better conditions of service. This action had had a heavy impact on academic activities in the various universities, bringing teaching and learning to a standstill.

There had been threats by the management of some universities to close down if the strike exceeded two weeks. In a conscious effort to resolve this issue, stakeholders had engaged UTAG at several meetings which initially proved futile.

According to UTAG president, Professor Charles Marfo, the agreement with government regarding the Single Spine Salary Structure in 2012 meant that an entry-level lecturer would receive the Ghana Cedi equivalent of $2,084 but successive governments had been paying lecturers lesser than that. He stated that they were not looking for an increment of their salaries but they only “want to be given what they believe is fair.”

Before the strike, UTAG had already hinted and threatened the government to embark on an industrial action if it did not take immediate steps to curb the worsening conditions of service of UTAG members.

True to their words, the association embarked on industrial action by withdrawing teaching, which included the conduct of examinations, marking of examination scripts, and other related matters.

But, thankfully, the strike which started on Monday, August 2, 2021, ended on August 18, 2021. Nonetheless it must be stated that amidst the fight for better conditions, students were at the receiving end of the back and forth between government and the lecturers.

As a third year student at the Ghana Institute of Journalism (GIJ),  I have a year more to complete school and having been dealt with enough academic stress throughout the outbreak of Coronavirus-19 disease  last year, the strike was an unfortunate ordeal students had to go through.

Last year, students stayed home for nine months, managing to study online and struggling to complete the semester. This year, we had to accumulate a 13-week lecture in six to nine weeks in order to cover the time lost.

We were recovering from “academic infirmity” until the sudden news of our lecturers embarking on a strike. This, indeed, left us contemplating on what to do with the rest of the semester.

Final year students were no exemption. It was unfortunate that in their last year of completing school, they were left stranded because lectures and the conduct of examinations had been suspended.

Per the academic calendar, we had barely two weeks to start examinations only to be met with the suspension of academic activities until the government took action.

Time was passing quickly and had the negations remained in a stalemate, we would have required more time to complete our academic work.

After what appeared to be a long silence on the part of government on the strike, steps were eventually put in place for the resumption of lectures.

Students had paid huge sums of money as ‘facility user fees’ after spending two-thirds of the semester on online classes, therefore, we could not have afforded to stay home any longer.

Professor Charles Marfo had said that the members of UTAG were “extremely unhappy about the government’s treatment, and although they were not enthused to stay home, they believed that they needed to fight for better conditions of service for themselves.”

The inconvenience of the about two-week-long strike cannot be overemphasised. I am somehow relieved that the government and UTAG came up with solutions which prompted the leadership of UTAG to call off the strike.

Education is not a break and pause affair; it is a continuous journey. And as the President rightfully said, “we should not be spectators but citizens”. Therefore, I wish to urge the government to prevent the concerns of UTAG and other labour organisations from degenerating into strikes which only create different forms of inconveniences to citizens.

Agitations on the labour front affect the nation in the long run and we must take pragmatic steps in for resolving all outstanding and future concerns of workers promptly.