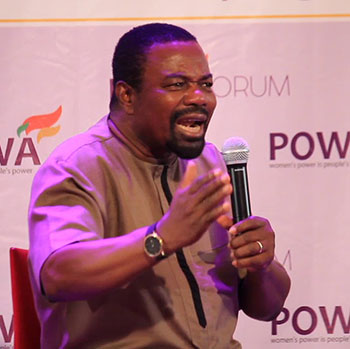 The Dean of Academic Affairs at the Ghana Armed Forces Command and Staff College (GAFCSC), Dr Vladimir Antwi-Danso, has advised the citizenry to report politicians and other stakeholders who make utterances that threatens the stability of the country as some comments against the State are prosecutable.

“Individuals or politicians who make such utterances do not have the interest of the nation at heart and must be condemned and handed over to the right institutions to be dealt with accordingly since those utterances divide the nation, insult sensibility of Ghanaians, threatens stability of the country from both sides of divide,” he warned.

His comments are on the back of statements by some members of the two major leading political parties, the New Patriotic Party (NPP) and the National Democratic Congress (NDC), threatening chaos during the expected new voters’ registration exercise.

Dr Antwi-Danso reiterated that “those utterances that clearly indicate some politicians and other stakeholders don’t have nation at heart, both sides are just talking about issues that should not be spoken, it doesn’t build the nation, it doesn’t give us anything, it rather divides us”.

He admonished the media to sanitise their media houses by not promoting reckless comment made on their platforms and laws of the nation must work because some comments against the State or president are prosecutable, there must be sanity in media since journalists can’t be blamed for such comments but how they go about it is important.

“Set agenda, condemn comments, and call on law enforcement agencies next time they are speaking they will be circumspect, publish and shame them because a good politician is one that puts interest of nation rather than talking by heart just for power, media houses must sanitise platforms by not promoting reckless comments,” Dr Antwi-Danso stressed. -ghanaweb.com