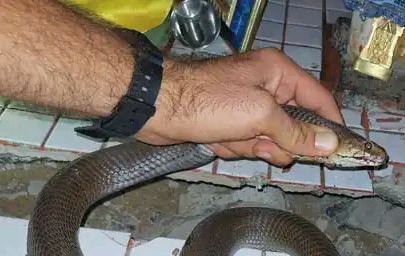 A snake rescuer has described the tense encounter with a cobra after being called to a home in South Africa’s Reservoir Hills.

Taking to Facebook, Nick Evans, who is a reptile educator and conservationist, said he was confronted by “an angry Mozambique spitting cobra” — a highly venomous snake native to Africa – last Friday.

Mr Evans said that he had been called to save a snake that had been discovered in a hole in the wall of a family’s prayer room but the reptile proved elusive when he arrived.

“When I arrived, I stuck my phone in the hole in the wall, on video mode, hoping to spot the snake. I heard something. When cobras are irritated, they emit a distinct, short hiss…However, I was unable to see it on the camera,” the snake catcher said.

Struggling to locate the snake, he said he resorted to tearing apart a section of the room as he spotted a gap which he suspected the snake had travelled through, adding that the homeowner was adamant to get the snake out.

He said he found the snake exactly where he expected it to be after some dismantling with the homeowner’s help.

“The reptile was not happy but I went ahead and pulled the snake out with the help of tongs. It spat furiously at my tongs, then me. The family was happy to see the back of this snake, and I don’t blame them!” he concluded in the post.  — ndtv.com