VGMA23 Artiste Of The Year: Delay is not denial- KiDi 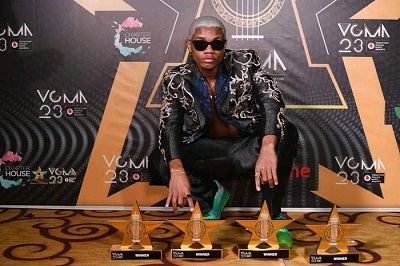 Expressing his appreciation after the crown, the ‘Touch It’ hitmaker said, “delay is not denial”.

“Delay is not denial, glory be to God, I want to start my thank you from MTN Hitmaker for introducing me to Ghana and everybody that has supported KiDi, the media, family fans and all those who have streamed my music and to my mother,” he said.

Ahead of this, the Mon Bebe hitmaker had already been crowned Artiste Of The Year at 3Music Award in the year under review.

On the night, KiDi who had nine nominations was able to win five of the categories he was nominated.

He won the Reggae/Dancehall Song of the Year, Album Of The Year, Vodafone Most Popular Song Of The Year, Afrobeats/Afro Pop Artiste and the ultimate.

There were other exciting performances on the night, where Obrafour and Tinny opened the show with nostalgic display which saw most of the people in the auditorium on their feet.

Stonebwoy and Black Sherif brought memories with their performance which kept people dancing throughout.