Victor Kuutuome — the “Clay Doctor” causing a stare with sculpture 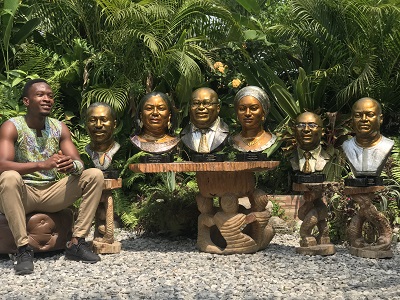 Has anyone ever tried drawing or painting a piece of art but the work turns out not to be anywhere close to what one had intended to portray?

That could be embarrassing sometimes and it would be most appropriate to ‘hide’ the supposed artwork or risk being mocked by their peers or even competitors.

However, that is not the case of young Victor Kuutuome. He falls in the category of persons who are meticulous about their craft and he produces marvelous works deserving commendation.

With barely three years in the Arts and Sculpture industry, his handiwork has become a huge attraction to many art enthusiasts.

Victor, 29, is a final year student of University of Education, Winneba. At the time of this interview, he was on a teaching internship in one of the schools in his locality.

He had studied Visual Arts at T.I. Ahmadiyya Secondary School in the Central Region in 2009 but financial constraints did not permit him to gain admission to the university the following year.

For eight years, he worked as an apprentice to a roadside artist before gaining admission finally to the university in 2017 to polish his skills in Sculpture and Graphic Design.

The sculptor, now popularly called “Clay Doctor” interacting with The Spectator about his recent works and future prospects, said he had wanted to abandon the course as he did not have initial interest in the field.

“I had wanted to study ceramics but one of my friends suggested we try something new so I settled on sculpture. I was completely lost during our first lesson because I did not have any prior knowledge in this area,” he narrated.

Nonetheless, he soon acquainted himself with the programme and had presented his first practical work which was rated highest among that of his compatriots in class.

As his interest in the craft grew further, Victor said he decided to understudy one of his lecturers at the Art Department who became his mentor.

“My lecturer [Dr. Thouphilus Kwesi Mensah] who was already a sculptor was impressed with my works and agreed that I work with him. His words of encouragement throughout the period pushed me to keep learning,” he noted.

Barring any unforeseen circumstance, Victor would graduate in a few months from today but he had already designed beautiful statues, depicting a host of personalities including popular footballer, Asamoah Gyan, President Akufo-Addo, Vice President Mahamudu Bawumia, and their spouses.

Others include well known musicians such as Stonebwoy, Shatta Wale, and Sarkodie which had gone viral in the early part of 2020.

His recent Akufo-Addo–Bawumia project which he calls “The Grace” had received positive feedback and he was looking forward to an opportunity to present the sculptures to the first gentleman of the land and his able deputy soon.

Touching on the various aspects of his work, Victor said he was able to “visualise the final outlook of any project before it started, adding that he had become engrossed in sculpture to the extent of diverting part of his school fees last year into completing one of his projects.

The man who hails from Nandom in the Upper West Region said he now found gratification in sculpture and believes “hardwork and passion” had contributed to his progress over the years.

“I enjoy giving a helping hand to others and the more I impart knowledge, the more I learn,” he said.

Victor indicated that a number of local and international clients had expressed interest and were “willing to pay good money” ever since his works began receiving public attention.

He said the craft, though exciting, came with some challenges and it took about one to three months to complete a project. However, there were others that could be done in two days.

“In addition to clay which is the main component, we use some chemicals also to enhance the final outlook but some of the chemicals could be harmful.

“Some people had gone blind due to exposure to some of the chemical so we take extra precaution when working with it,” he added.

Last year, Victor and six of his other colleagues were supposed to work on a project for their university but it was truncated due to the lockdown and subsequent closure of schools.

Obama, as others prefer to call him, wants to pursue a Masters Programme in sculpture right after school and consider lecturing in future as well.

While admitting that a section of the public were beginning to understand that statues were “not meant for the dead alone,” he said he was focused on improving the quality of his works and not seeking to compete with anybody.

“Sculpture is the father of art hence producing a statue of someone is an act of immortalising the person. We all will die someday but a sculpture will make the person be remembered forever,” he noted.

According to him, “some individuals now presented statue to their loved ones as a form appreciation but there is still the need for sensitisation while the government provides the needed support for the art and culture industry.”

Victor said he did not “expect a lot of things to happen so soon” and much of his gratitude goes to his mentor and lecturer, Dr Mensah.

The “Clay Doctor,” got his name when he wore a white overcoat to lectures. A friend had teased him briefly for appearing “too decent” to be working with clay and that nickname has since become his brand name.”

Apart from his day’s job, he has a miniature studio at home where he does most of  his work anytime he receives orders.