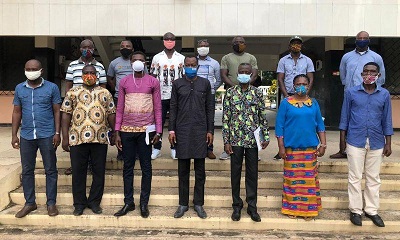 The visit forms part of the RFA’s series of meetings and engagement with stakeholders in football. This is the second time the football fraternity is meeting the office of the Regional Minister.

Chairman of the Volta Regional Football Association, Daniel Agbogah, outlined a sequel of activities and steps the RFA has embarked on since assuming office in October 2019. He explained that plans are already in motion to grow the game in the region.

According to a statement released by the VRFA Communications Department, the plans included the secretariat’s request of land to build a regional head office (Secretariat), acquire offices for the nine functional districts football associations, revive juvenile football, deploy the “catch them young” policy to attract and develop budding talents in refereeing and strategies to develop women’s football.

Mr Agbogah further urged the Minister to assist in getting the district assemblies to appreciate the need to invest in sports with their sports fund and other sources of finance so as to reduce social vices that some idle youth may engage in.

The regional Chairman also used the medium to introduce members of the newly-elected Executive Council to the Minister.

He also promised to immediately mediate on some proposals enumerated, especially the land acquisition through the regional lands commission and refer other concerns to the Regional Minister and other stakeholders for further action.

Rev Aveletey further tasked the VRFA to bring back the lost glories the region once enjoyed in the elite division by solidifying the regional Division Two teams for national standards.

Regional Director of the National Sports Authority (NSA), Kwame Amponfi Jr, also seized the opportunity to encourage the media on positive reportage of sporting activities in the region.

The Regional Executive Council further met the family of former Chairman of the VRFA, Mr Francis Dogbatse to express their condolences for the loss of his wife, Regina Adzo Dogbatse, who passed on in January, 2020 at the Ho Teaching Hospital.

A similar call would be made on the Mr Kwasi Owusu Yeboah, the Regional Minister for Oti Region, at a later date since the RFA also has oversight responsibility for the region.