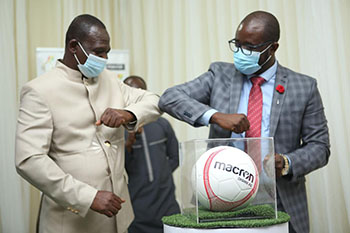 PRESIDENT of the Ghana Football Association (GFA) Kurt Okraku, says his administration is committed to developing football by eradicating the problems facing the sport.

In so doing, the FA says it would be tackling the problems facing the sport right from the base by strategically aligning and positioning itself to rope in support for the game.

As first step, the FA has signed a three-year football sponsorship deal worth GH¢1.6m with kits and football manufacturer Macron Ghana Limited as the official match ball partner of the FA.

With the signing, Macron will supply the GFA a total of 5,000 pieces of footballs and 1,500 pieces of bibs each for the next three league seasons.

Speaking at the signing ceremony on Wednesday at the offices of the GFA, Mr Okraku said “the era where you visit the training grounds of some clubs only to be welcomed with about 30 players chasing five footballs, is history.”

“If you are a footballer and you want to play football but you cannot have access to balls, it is a big challenge, and this we are eradicating with this partnership deal.

“The sponsorship has come at an opportune time and will help clubs in the Premier and Division One Leagues have enough footballs at their disposal to train with.

“The story of insufficient football reported by our dear clubs for our industry that charts its successes to the use of these balls is indeed a very sad story. We together with Macron have changed this sad story and we can easily say this is a game-changer for the clubs,” he stressed.

The partnership, according to the FA boss, would ensure that those who have taken the trade of football will have a livelihood, “because without the balls they cannot enhance and develop their talents; and if talents are not developed there is no livelihood.”

Chief Executive Officer of Macron Ghana Limited, Alhaji Alhassan Mutala Haruna, expressed delight at the deal with the Football Association, adding that his outfit was ready to help in the development of the game in the country and in the sub-region.