What Nana Yaw Amponsah did to get Kotoko job 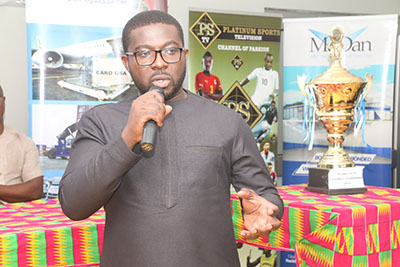 It has been revealed that former Ghana Football Association (GFA) Vice President, George Afriyie was considered for the Asante Kotoko Chief Executive Officer job.
However, the position went to Nana Yaw Amponsah because he impressed the Board of Directors during his interview. According to the spokesman of the Kotoko board, Kwadwo Boateng Genfi, the club shortlisted George Afriyie and Nana Yaw Amponsah for the position.Nana Yaw Amponsah was first to appear before the board and he was so impressive that they took a decision to cancel Afriyie’s interview.The 12-member board was convinced Nana Yaw Amponsah was the right man for the job, hence decided to hand him a three-year contract.”What happened was that we met a few people and shortlisted two people. But later, one of them didn’t show much interest but we had given them an appointment for an interview to be conducted on the same day: one in the morning, one in the afternoon.”Nana Yaw came in the morning and he was so impressive that even though Manhyia had tasked us to do more head-hunting, we felt that he was the one we were looking for,” he pointed out.”We fell in love with him at the interview; he was seriously and highly impressive. Even the presentation he did during the interview was such that we decided not to bother ourselves to call any more people for interviews in order not to waste our time and that of those individuals.”According to Mr Genfi the board voted unanimously in Mr Amponsah’s favour.”It was unanimous – 12-0 – everyone on the board voted for him. It was only the voting for the timing of the announcement that was 11-1 because one person voted against it,” he noted.”When we decided on Nana Yaw, I personally called the other person (George Afriyie) to inform him about it.”I spoke with him personally, and honestly I was so amazed at his level of confidence. He is a fantastic gentleman.””He knows the inside-out of the game and I think he would also have been good but when we interviewed Nana Yaw we were satisfied with his performance,” Mr Genfi stated.”So it wasn’t a matter of rejection. No. We needed only one person and after Nana Yaw’s interview we decided not to go any further,” he emphasised.-Ghanaweb