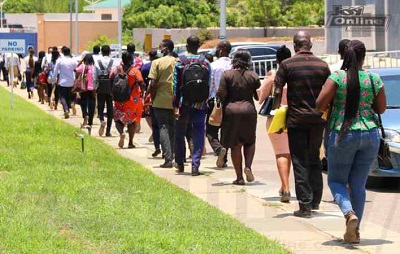 Employment is a relationship between two parties, usually based on a contract where work is paid for.  Employees work for a payment, which may be in the form of an hourly wage for piece of work or an annual salary depending on the type of work an employee does or the sector he or she works.  On the other hand, unemployment, refers to individuals who are employable and actively seeking for a job but are unable to find jobs.

Global Models and analyst expectations.  In the long-term, the country’s unemployment rate is projected to trend around 4.50 per cent in 2022 and 4.30 per cent in 2023, according to our econometric models.

For the benefit of my patrons, readers and Ghanaians in general, it is important to give a few statistics in percentage about the unemployment rate in the country between 2016 and 2020. In 2016, we recorded 5.45 per cent, 2017, 4.22 per cent, 2018, 4.16 per cent, 2019, 4.12 per cent and 4.53 per cent in 2020 These variations in figures about the country’s unemployment rate show the level of insecurity about the future of our graduates who are churned out yearly from our universities and other professional educational institutions.  It is of interest to know that in Ghana today, there is, Unemployed University Graduates Association.  The National Labour Commission (NLC) estimates a staggering unemployment figure of 700,000.  It appears that no coordinated strategies have been fashioned out to address the unemployment problem in our country.

The recent maiden Youth Employment Agency (YEA) Fair held at the Accra International Conference Centre on September 10, 2021, which resulted in a stampede as a result of the large attendance of unemployed youth who had thronged the centre to seek for jobs exposed the rate of job insecurity in our country.

The YEA held the event to help connect job seekers to employers.  As part of the event, there was supposed to be live recruitment where over 100 companies were reported to have been present to do instant recruitment.  However, the situation turned chaotic as the turnout was overwhelming.  Video recordings of the event showed how the police had a difficult task in controlling the crowd.  It showed also broken glasses soiled with droplets of blood on the floor.  A number of these job seekers were injured in the process.

What transpired at the YEA fair in Accra the nation’s capital, really gives cause for worry and concern about the future of the teeming youth who have come out of our educational institutions and looking for non-existing jobs.

HIGH RATE OF UNEMPLOYMENT IN THE COUNTRY

The problem of unemployment in this country has been in existence for so many years and governments have never found a cure to this serious canker.  Tried as they could, none of them has been able to address this situation as it continues to worsen.  The way the country’s education system is currently structured, has also contributed to the churning out of more graduates into the system with no jobs to absorb them even with their marvellous performance in their education.  It will be of interest to know that First Class and Master Degree holders as well as those with Doctorate degrees are finding it very difficult to get jobs.  This thorny situation has facilitated the brain drain of qualified graduates to other countries to seek greener pastures at the expense of the country’s development.  Medical doctors, engineers, lawyers and other professionals trained with the hard earned foreign exchange, are serving in various capacities in other countries through no fault of theirs because of lack of employment.  Indeed, this is a worrying signal we need to address with dispatch.

COUNTRY NOT KEEPING FAITH WITH THE PEOPLE

It is a fact that our economy has not kept faith with the people, hence the huge backlog of unemployment rate in our dear country.  The unemployment rate which has become a national security issue is getting more and more desperate and can explode at any time considering what is happening and we need to adopt special measures to address the situation.  The problem as it stands now, should give the leaders of this country, a lot of headache and sleepless night.  We need to bring all the think tanks together in a major summit to brainstorm on this challenging situation and the way forward.

It is a fact that the rise in crime wave, corruption and other negative practices in our country, can be attributed to desperation among the youth.  Some of our idled youth have taken advantage of the situation to engage in all manner of corruption and crime related issues to make a living.  Available statistics indicate that most of these heinous crimes in the country are carried out by the youth.  We have been paying lip-service in this country for far too long and we need to wake up from our slumber and be proactive in dealing with some of these situations that are pushing the clock of progress backwards.

This country can easily rise above these difficulties if we are able to support our local industries and provide them with the needed resources and inputs to expand production.  By so doing, we will be able to absorb the teeming unemployed graduates and provide them with the necessary jobs.  Our local textile industries and manufacturing companies are dying gradually and we look on unconcerned.  The agriculture sector needs to be revamped and modernised in line with the ‘Planting for Food and Jobs’ agenda of the government to attract and encourage the youth to embrace the concept and work in that lucrative sector.

We have abundance of raw materials in this country but how to process them into finished goods has been our bane.  The Tema Oil Refinery (TOR), the Ghana National Petroleum Company (GNPC), the Electricity Company of Ghana (ECG), the Bulk Oil Storage and Transportation Company (BOST), GIHOC manufacturing companies and the host of other companies which are facing problems need to be capitalised and revamped to attract foreign investments so that they can employ most of our unemployed youth who are roaming the streets daily in search of jobs.

It is high time we limited the importation of foreign goods which we can manufacture locally and rather built and strengthened our local industries to produce quality goods for our markets.  Spending the chunk of our foreign exchange reserves to procure foreign goods is not in the interest of this country which abounds in human talents.  Our human resources are among the best in the whole world and that is why many foreign countries continue to knock on our doors for our graduates to help them restructure their economies.

Our leaders need to put an end to the wasteful spending on unnecessary things that do not help in the growth of the economy and channel our meagre resources into productive ventures so as to create the needed jobs for the teeming unemployed youth.