When the preacher man uses football for effect 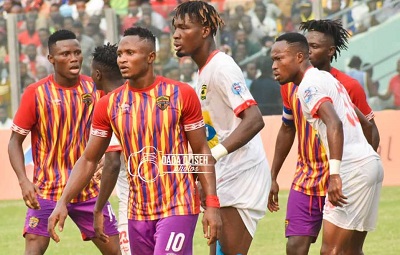 At long last, the Ghana Premier League (GPL) roars off today after more than a year of inactivity. It is a great moment to relish again.

The aforesaid statement was not from a football administrator, nor one of the key actors of the domestic game. They were opening remarks of Rev. Father Emmanuel Duku of the St. Anthony Catholic Church in Nungua – a suburb of Accra.

It must be emphasised strongly that his statement was made way back before the emergence of the COVID-19 pandemic that hit the globe somewhere in March, this year.

But as has been his fashion, Rev. Duku blends his homily with pieces of thrilling, comical football news to the admiration of the congregation – especially the youth, who usually respond with tumultuous applause and cheers amid laughter.

He has a way of doing it and his absence is always felt by the youth especially – whenever he goes to a different parish to preach.

A dyed-in-the-wool fan of English side Manchester United and local side Asante Kotoko, the man of God says, employing football during the sermon is a way of catching the attention of the congregation.

“Sometimes, even before you start preaching, you look at the faces of the congregation and realise that they do not look bright – maybe out of tiredness, fatigue or some kind of stress. So, along the way, you try to poke some fun around football and suddenly everybody starts laughing and screaming in ecstasy,” he told me.

Indeed, football is the passion of the nation, and it is teasingly said that the 30 million Ghanaian population are all coaches! This is drawn from the fact that during games involving the national teams – especially the Black Stars, everybody interviewed can say one or two things that culminated in the victory, defeat or draw.

It is so deep, intricately plain-woven! That is the Ghanaian for you!

Perhaps, this COVID-19 moments will call for a more profound, tactful and maybe humorous way of keeping the congregation spell-bound during the homily.

Truth is that, the pandemic has dealt a fatal blow to many homes, and according to a senior pastor of the Church of the Messiah, at Swedru in the Central Region, Eric Buabeng, church members would have to be handled with sagacity and discernment.

“I love sports and use lots of football anecdotes to keep them engrossed on the message,” he said, adding that “you’ll need loads of cognitive content and tactfulness to handle the congregation today.”

According to him, the economic activities of many families have been seriously affected. Indeed, some of these ‘victims’ have come to church with their brains ‘scattered’ and looking for quick solutions to their predicament.

“And, of course you need to be smart. You do not feed such ‘feeble’ people with hard message. It wouldn’t just sink.”

So, before delivering his sermon at the New Covenant Ministry in Abeka Lapaz, an Accra suburb, Pastor Daniel Opuni screamed out: “Football is back!”

He was referring to the return of European top flight leagues: German Bundesliga, English Premier League and the Spanish La Liga. The leagues are being played in empty stadia; but never mind! Ghanaians have some bang-up affection for foreign football too.

Interestingly, the response from the nearly 100 Sunday morning worshipers was a thunderous appellation of “Pastor Opuni and his football,” as they burst into prolonged laughter.

A member of the church, who only identified himself as Alex, still had smiles emblazoned all over his face, after the one-hour permitted service.

“I admire the way Pastor Opuni interlaces his sermon with football. His illustrations with football and sports in general is simply apt,” he observed.

For Pastor Opuni, this has been a style he sculptured long ago when he was at pastoral school.

“Yes, that for me is a perfect way of grabbing their attention.  It was a style I learned way back in school. We’re in difficult times and once I know they love the game, I always employ it to my advantage and luckily for me, it is working effectively,” he told the writer.

In the course of preaching, Pastor Opuni would illustrate to the congregation how they need to run away from the COVID-19 pandemic with the flight of Usain Bolt.

“It is very important for you to be equipped with the word of God, but you need to have the finest pair of feet like Usain Bolt to avoid catching the virus by adhering to the safety protocols of wearing the face mask, washing your hands with running water and soap as well as the use of alcohol-based sanitisers.”

Bolt is a Jamaican former sprinter and widely considered to be the greatest sprinter of all time. He hanged his spikes in 2017 and was a world record holder in the 100m, 200m and 4×100 metres.

Indeed, for those who believe football and religion have something in common, or are intrinsically linked – maybe, they are right!