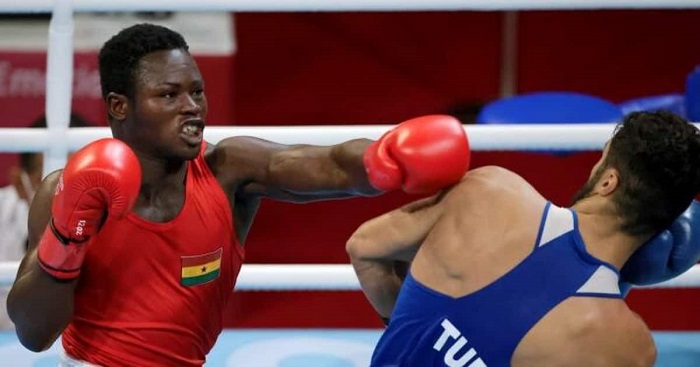 Last Friday, Ghanaians were startled by the news that Ghana’s light heavyweight boxer campaigning at the Birmingham Commonwealth Games – Shakul Samed, had been suspended from the Games and subsequently sent home for allegedly taking a banned substance – Furosemide.

The discomfiting news racked the Ghanaian camp, Shakul having been tipped to win a medal at the Games.

Nicknamed the ‘Sharp Shooter’, the boxer himself was said to have been downhearted by the Commonwealth Games Federation Anti-doping and Medical Commission’s decision to expel him from Birmingham – after his Sample A was found to contain the banned diuretic and masking agent Furosemide.

He was said to have cried all day on hearing the news.

“He’s simply inconsolable. We’re all shocked ourselves because we don’t know what really happened,” says one of his teammates who wanted to remain nameless.

Back home, the shamed boxer’s elder brother Bastir Samir, told the Times Sports at the weekend that the family was equally distraught on hearing the news.

“The entire family is still in grave shock. My dad is devastated. In fact, everybody in the family as well as friends is wrecked. We were so sure he was going to come back with a medal; not an agonizing news of his suspension,” added Samir – himself an indomitable Ghanaian light heavyweight boxer.

So, what is Furosemide, the drug Shakul was alleged to have taken? Furosemide is said to be a diuretic medication used to treat fluid build-up due to heart failure, liver scarring, or kidney disease. It may also be used for the treatment of high blood pressure. It can be taken by injection into a vein or by mouth.

Indeed, Furosemide is a common drug doctors prescribe for a wide range of medical conditions – and the young boxer probably may have taken it not to gain a competitive advantage but for something else and because of lack of appropriate information, the unexpected happened.

Research also shows that it can be used by athletes to mask the presence of performance-enhancing drugs in urine and/or excrete water for rapid weight loss. And, that is the suspicion of the authorities.

According to the Commonwealth Games Federation Anti-Doping and Medical Commission, the drug is prohibited.

Question now dangling on the lips of Ghanaians is that, who gave or recommended the drug to Shakul? Did the boxer carry it from Accra into the Games? If yes, for what purpose? Does he have any chronic ailment that his boxing technical team is not aware of? We have got to find answers to all these questions so this unfortunate incident is not repeated in future competitions.

Come to think of it, Ghana has a good National Anti-doping Committee with a good department responsible for educating sports men and women – and how come our boxing contingent did not have access to such committee?

An education, we are told, would have included taking the athletes’ medical history as well as medications the athletes are taking for any chronic medical condition.

According to Dr Prince Pambo, a member of the National Anti-Doping Organisation (NADO), they could have triggered the Therapeutic use exemption process if through education and screening, it came up that the boxer needs furosemide to survive.

He insisted that had Shakul had access to education, he would have discussed his weight issues and receive appropriate guidance as to how to drop weight fairly – without resorting to the use of the banned substance which the athlete might not have been aware of.

What happened to Shakul Samed should serve as an eye-opener for our contingent – diving into future sporting festivals. Once we have NADO, our sportsmen and women ought to take full advantage of it for their own good – and for the good of the country.

Clearly, the unfortunate incident could easily have been avoided if we had been a taken due diligence in the way we do our things. But as usual, we take things for granted – and always live to count losses that should have been gains to us and the nation.

Whilst we are it, it is important that we find it how the banned drug (Furosemide) got into the hands of the Sharp Shooter, who campaigned in the Tokyo 2020 Olympic Games.