Why the delay in honouring them? 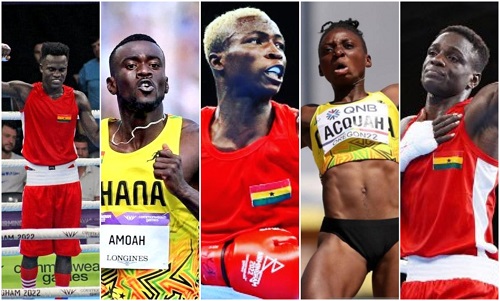 at the Birmingham Games

Earlier this week, Ghana’s medalists at the recently-held Commonwealth Games in Birmingham, expressed grave discontent over the delay in awarding them – weeks after a promise to that effect.

The athletes – five in number – had returned home from the Birmingham Games on Wednesday, August 10 last month, in high spirits after making the nation proud, to some large extent. As usual, praises upon praises were decanted on them. It was a normal thing that greeted every feat in Ghana.

Not surprising, the medalists did not smile at the loads of laudations. That was not what they needed.

From their demeanour, they were waiting for prizes that went with their performance to be announced. But nothing came except promises.

“When we arrived on Wednesday, August 10, they told us we were going to receive something good on Friday; that’s two days later. Yet, it’s almost a month now and nothing has happened,” one of the frustrated athletes told the Spectator Sports.

In reaction, a source at the Ministry of Youth and Sports that wants to remain anonymous, said “arrangements are far advanced to reward the athletes.”

“We have not forgotten them at all; they’ll be sorted out pretty soon,” it insisted.

As of the time of putting this piece together, the athletes were yet to receive any national rewards, a development which has been condemned by many followers of Ghana sports.

Meanwhile, barely 24 hours after touching down, Nigeria’s Ministry of Youth and Sports Development splashed $25,000 on Team Nigeria athletes who clinched 35 medals at the Commonwealth Games in Birmingham.

Gold medal winners received $5,000 each, while their coaches were also given $3,000 each. Silver medalists pocketed $3,000 for their effort with bronze medalists settling for $2,000.

One question that many have asked is what is preventing the government from honouring the athletes – a whole month after returning from the Games?

Four years ago, the nation’s only medallist at the Gold Coast Commonwealth Games – boxer Jessie Lartey, received $2,000 financial reward from the government, for winning bronze. The honour came barely a week on returning from the Games.

There was massive expansion on the medal haul this time around as five athletes – Paul Amoah (bronze, 200m), Deborah Acquah (bronze, long jump), Joseph Commey (silver, boxing), Abraham Mensah (silver, boxing) and Abdul Wahid (bronze, boxing) all bestowed the nation with something to smile about.

Delay in honouring them has dampened their spirit – even if temporarily. It is inexplicable! Certainly, if they were football players that had brought medals home, they were going to be treated differently. This must stop! It is not the best. This is not the way to promote sports.

Most athletes have a natural talent for their sport. But what motivates them to drive themselves to succeed is to be motivated extrinsically. In our part of the world, giving the athlete something in the form of cash – as the Nigerian government had done is most admirable to them.

Even before they embarked on their campaign in Birmingham, the Nigerian athletes were told of what awaited them should they win medals. That got them dreaming for gold. But we were silent on ours, suggesting we did not believe in our own.

Let us be serious on the way we treat our athletes; for they are the same people we would be relying on in future competitions. Who else?